Did you ever go out with a person for a night and after some months although it is over you are still keeping refreshing your memories and thinking about that person? Well, in my case, it’s all about Patmos.  In case you didn’t read my previous posts about this island, Patmos is a place where you can relax and enjoy a quality vacation.  Actually, it is a lot more than that, and I am sure you will be charmed as much as I was after the visit.

The island, which is known as the most orthodox of all the Greek islands, is home to more churches than days of the year, and is where St. John was exiled to by the Romans, writing the Book of Revelations from a cave nestled high in the hills (the UNESCO heritage site is known as the ‘Cave of the Apocalypse’).Part of the reason that the island has remained so calm and untouched is in part because of its rich religious history and the fact that the monastery of St. John has to approve any and all buildings on the island. 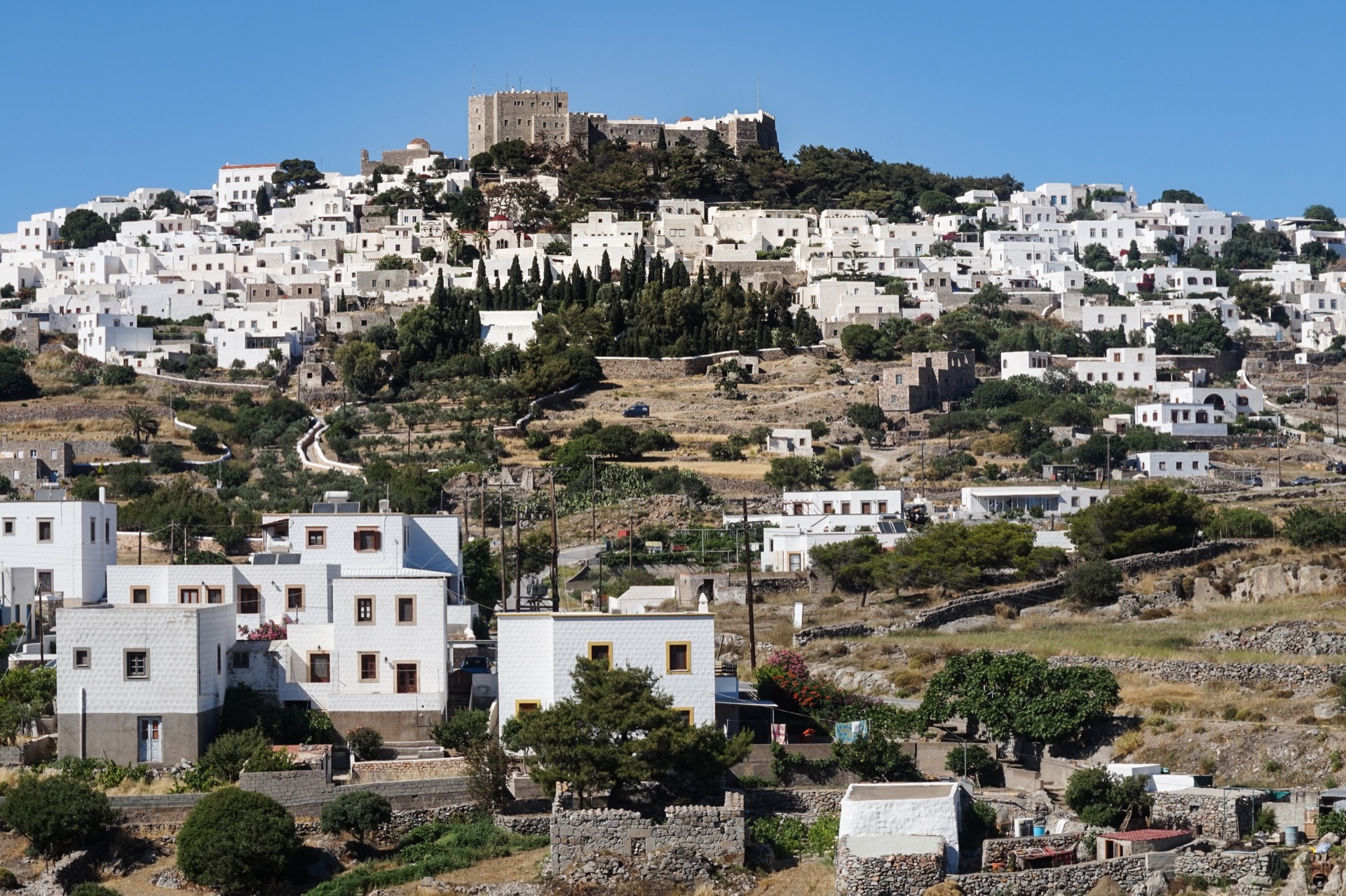 Crowning the top of the hill of Chora stands the Monastery of Saint John Theologian which is the most impressive sight visible on Patmos. It was built on the ruins of a Paleochristian church, over the ruins of a pagan temple. You will see it from your boat before you are docking at the port of Patmos. At the first moment, I have misplaced it for a Byzantine castle and it was actually built as a fortress with its walls rising over 15 meters high.  In 1999. the monastery that was founded back in 1088 was declared as a UNESCO World Heritage site. 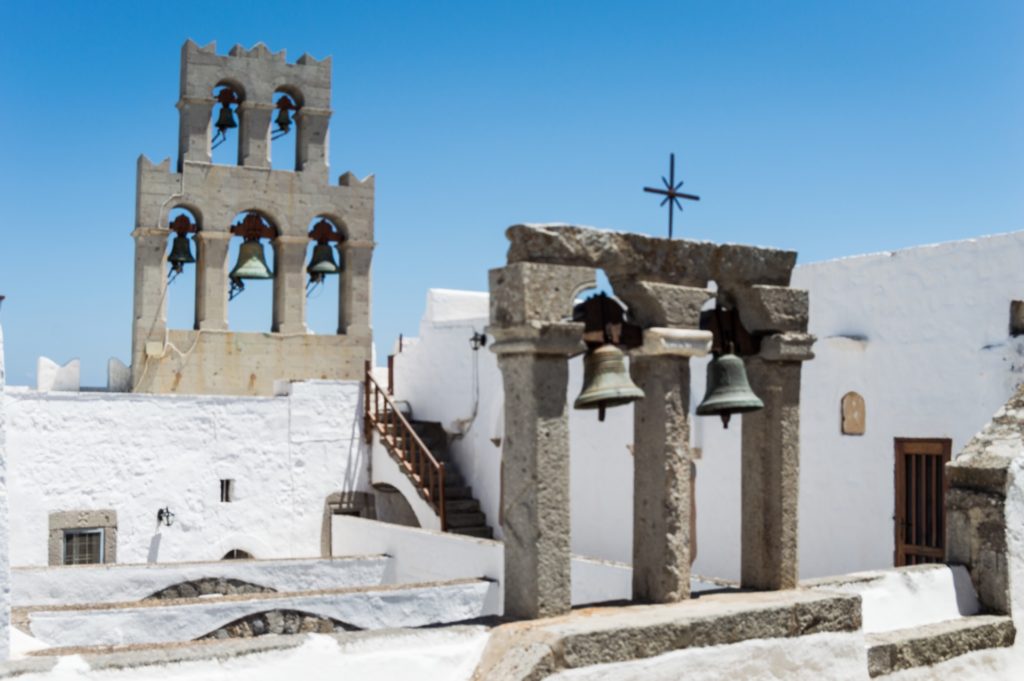 Once we go inside the monastery and pass the imposing entrance gate, the main church shows a golden wood iconostasis and magnificent frescoes. The enchantment continues as we are visiting the museum. It houses an impressive collection of icons, original manuscripts from the bible, objects of silver and gold and sacred relics. I was impressed by all those valuable pieces such as an icon made by El Greco!

Then, there is the library, one of the greatest of Orthodoxy. I was privileged to be taken on a private tour of the monastery’s library which is not open to the public and can only be accessed by the Byzantine and biblical scholars with a special permission. Its immeasurable value lies on the manuscript codices and in over 13.000 documents related to the history of the monastery and the island dating back to 1073. The oldest one, the “Purple” code, dates back to the 6th century. 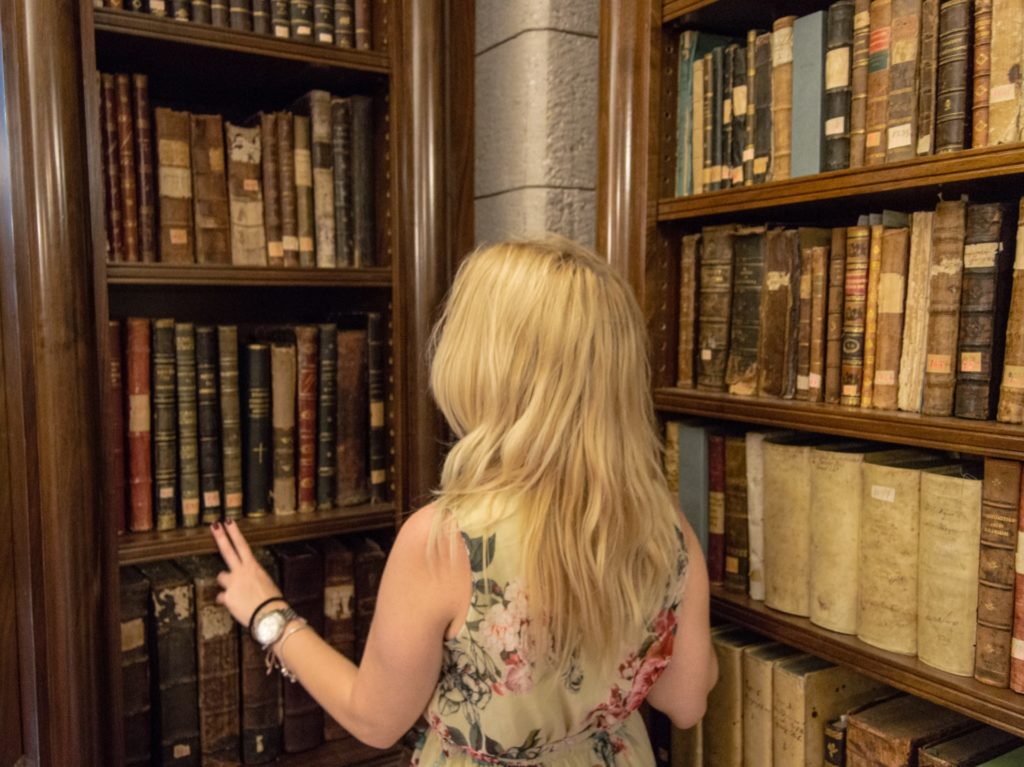 After the tour of the Monastery, I had one more privilege to have a lunch inside the monastery. You know how much I love food and good recipes, and monks are famous by being the best chefs in the world for a reason!

The cave of  the Apocalypse

Located halfway up the mountain of the Monastery of Saint John, the Holy Grotto holds significant religious value as the place where Saint John recorded the visions he received in the Book of Revelations. The Cave of the Apocalypse is the second holy place in the world after Jerusalem, for all the religions not just the Christians as it is believed that this is the place where the creator of the world appeared. At the entrance of the cave, where was built a chapel, there is an inscription, a quotation from the book of Genesis (28:7). “This is no other but the house of God, and the gate of heaven.” 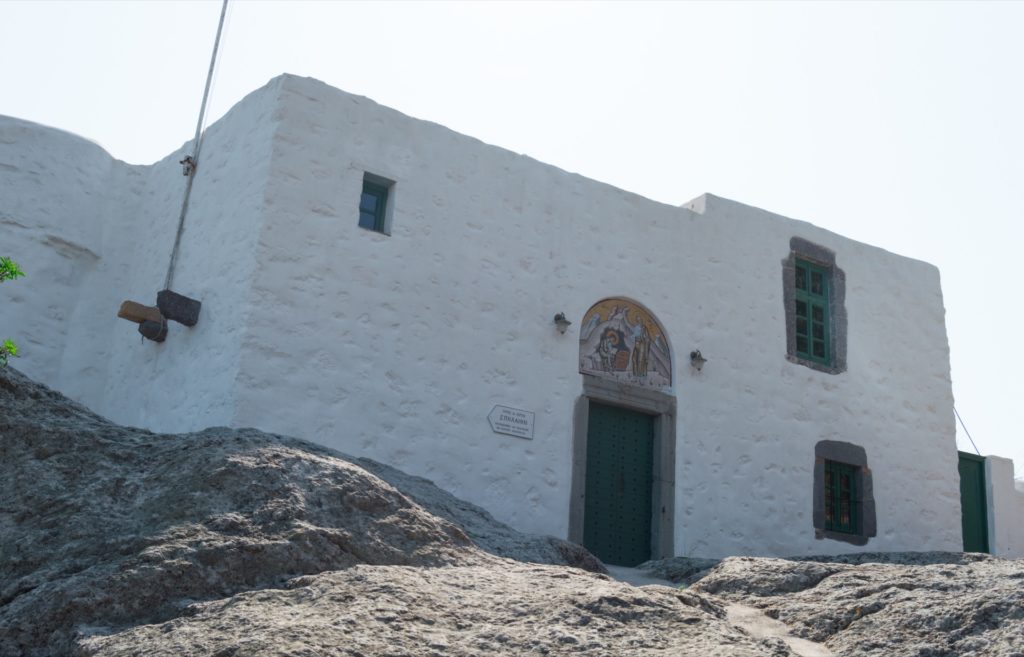 As our guide explained the story, Jesus Christ came to St. John and instructed him to write down everything that he would see and experience from that day onwards. As St. John was old, he could not do anything but speak so he asked his student Prochoros to write down everything he would share with him. The book of Revelation doesn’t talk about religion, it is about the future from today until the end of the world. Also, it is interesting that it is written in many symbols. For example, 77 symbols use number seven. Many academics from all over the world tried to explain this case, unfortunately without success.

In the cave, you can see mosaics portraying the visions, Saint John’s resting place where he used a rock as a pillow and the fissures where he heard the voice of God. It is a stunning example of a pilgrimage site and was declared a World Heritage Site in 2006. 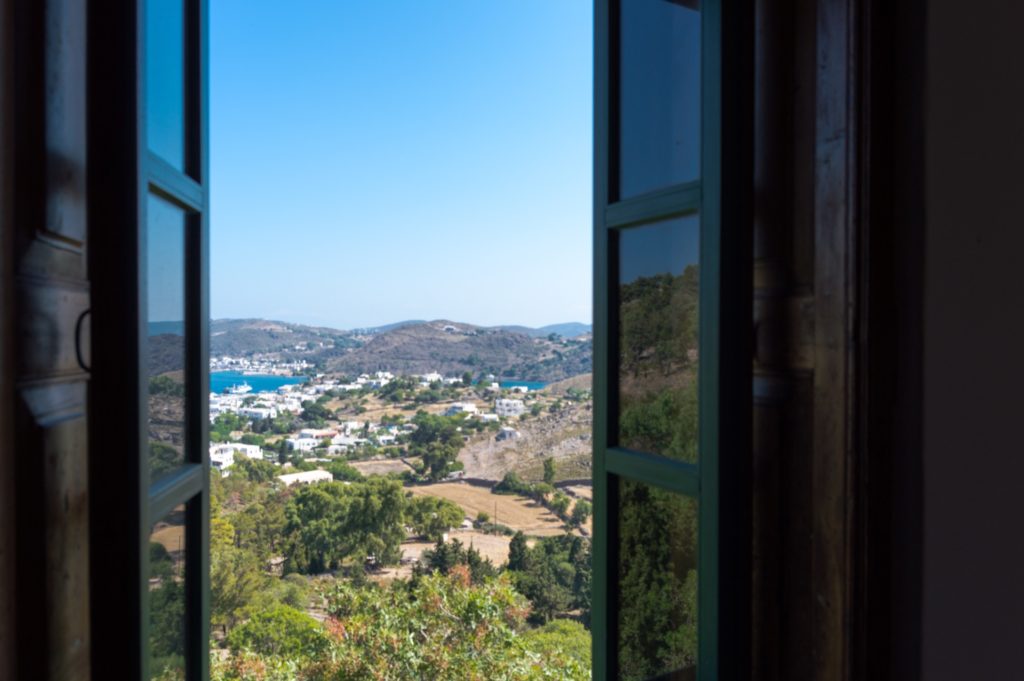 I already spoke to you about Chora in my previous posts so I will not take you back there, but it is definitely worth visiting! The first village you will see after you arrive at the island is Skala. Probably the most vibrant settlement on the island. During the 16th century, Skala was the most prominent commercial port of the Mediterranean lined with warehouses and maintaining facilities for ships. Pirates would trade loot which was then used for making and exporting women’s stocking and embroidery. Skala is not the capital of the island, but it’s undoubtedly the largest town. I fell in love with the Venetian style of the buildings, local souvenir shops, restaurants, bars and ice cream stores!

Walking through Chora Mr Iakovos explained about the architecture of the buildings and how gardens were built behind the stone walls to protect its owners from the pirate raids. More about this oldest mansion of the island I wrote in 5 thoughts I had after a visit to the oldest mansion. 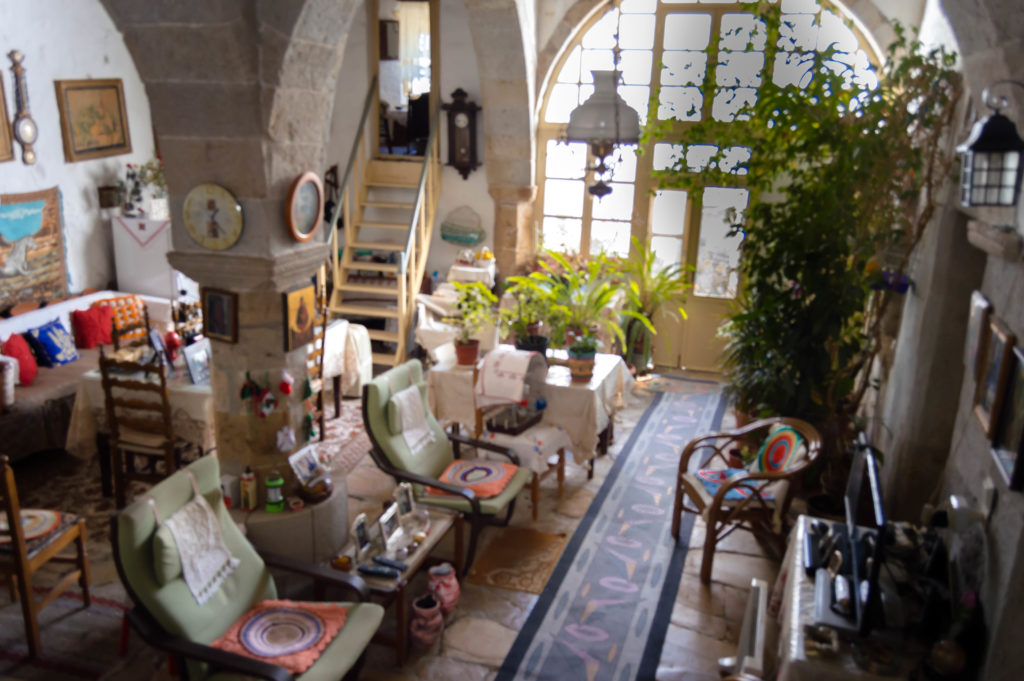 The Simantiri Mansion was built in 1625.  Today it is a private residence that has its upper floor open to the public as a museum. On display are period furniture, kitchen utensils, and various collectible decorative items.  Amongst the Art Works, you can find a painting by Nikolao Gyzi and Russian icons from the 14th and 15th centuries.  I was welcomed by the old lady, the eighth generation owner Ms. Morfousa Simantiri, who describes the objects with the stories from the past and jokes about their use.

Still up in close to Chora, three Windmills represents an important jewel of Patmos.  George Kamitsis who was involved in the restoration project of the windmills in 2010 which was awarded by Europa Nostra, passionately explained me the work they have done and the importance of the project. Two of the windmills date back to 1588 and the third one was build in 1863. 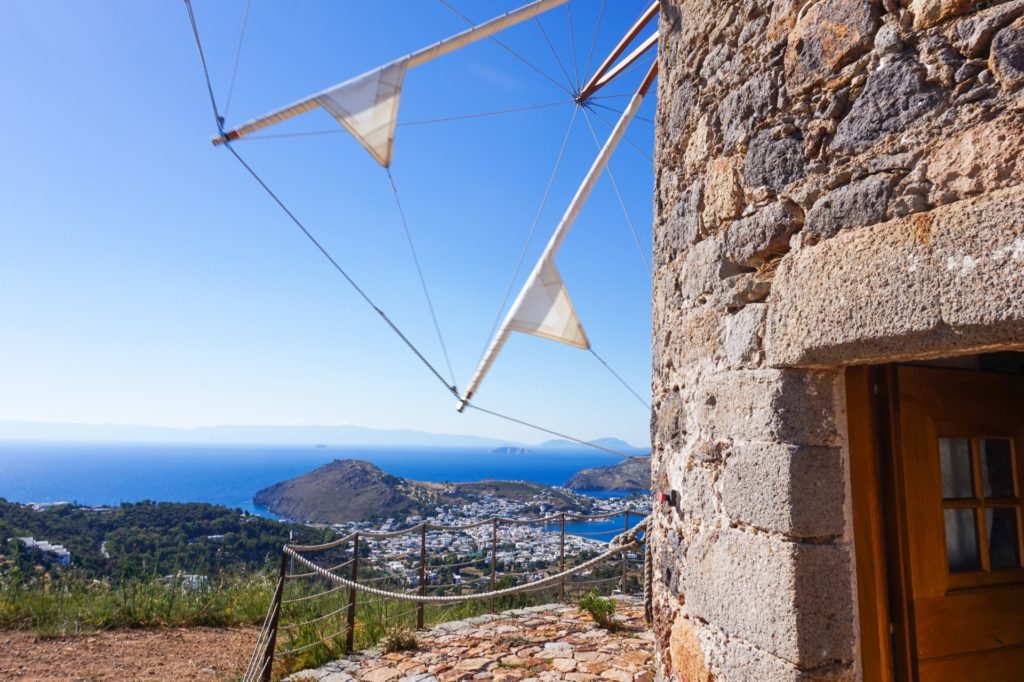 Patmos is all sandy coastlines, secluded coves, and iris-blue waters

Many of my friends agree that Patmos has some of the most beautiful beaches in Greece. I am feeling happy that now I can officially confirm it!  Crystal water,  peaceful beaches – I know! Everything anyone can dream of! I need to mention that as a program of the trip I have visited at least 15 beaches but I had the chance to swim at few.

It is nearby Skala, and it is beach mixed with pebbles. There are bar and taverna around. It was not so crowded and there is the long row of trees that offer shade!

Definitely, my favorite one as it was just below the hotel where I stayed. I guess that  I wouldn’t have anything against to spend the whole holiday there! Or I thought so till I didn’t visit the most beautiful beach I ‘ve ever been so far!

Psili Ammos Beach is ranked among the top beaches of Patmos, you will understand why when you get here. This heavenly beach is located in a secluded cove, 10 kilometers away from Chora. In order to reach this idyllic spot, I had to challenge my hiking skills for about 15 to 20 minutes. Honestly, it was not so hard and reaching the beach was like an award!  In the season there is also a boat that can take you there which departs from Skala. The beach only has one taverna serving drinks and snacks. 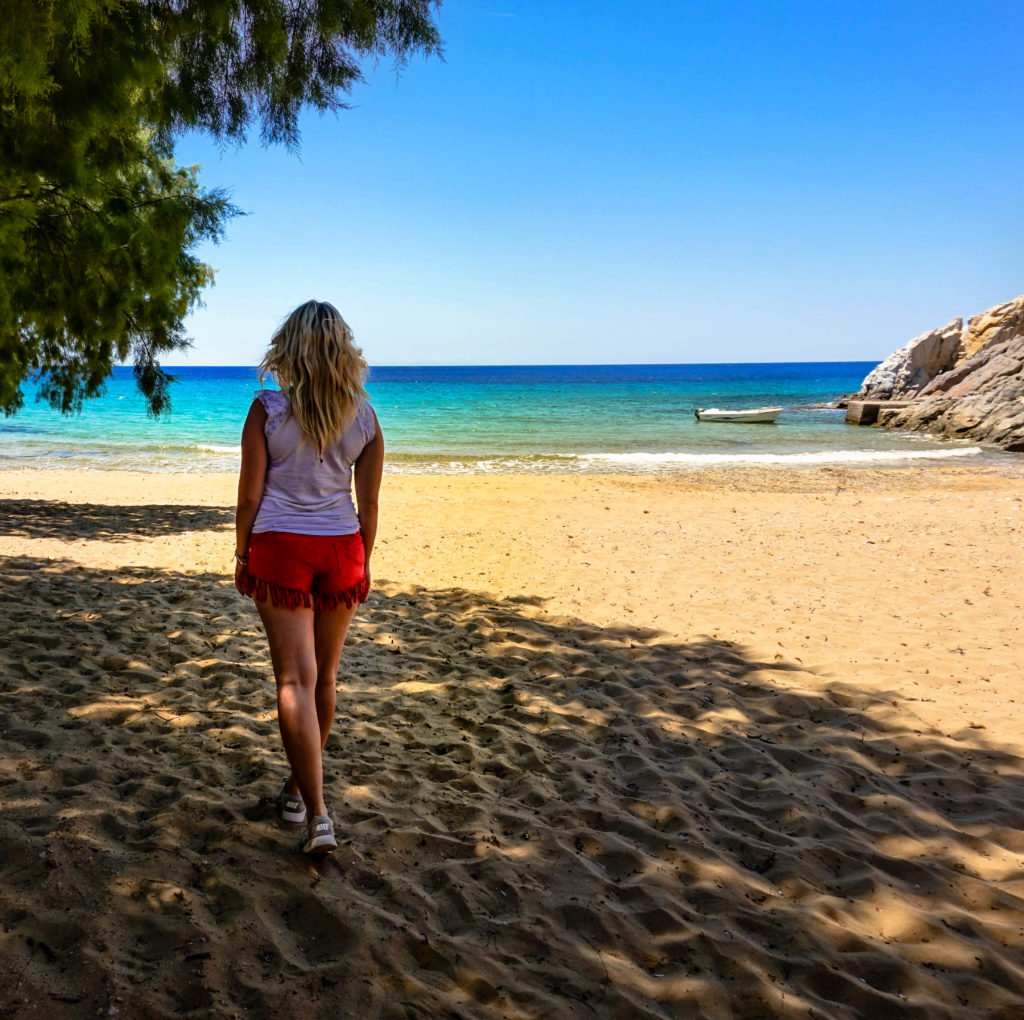 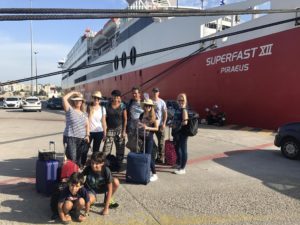 Patmos is connected to Athens by ferry and the trip takes approximately 8 hours. I traveled to Patmos by Superfast Ferries and I had a very enjoyable journey. You can also get to Patmos by plane to the nearby islands of Leros, Kos, Samos or even Rhodes and take a boat from there. The best option is Samos as the airport is really close to the port. Talking about transport,  I would like to thank  Patmos Rent a Car who helped me to discover the island in the best possible way.

This island indeed surprised me for the calmness, the beauty and the hospitality of the locals. I loved every place I visited. Behind every place, there is a magical person who inspires it! I am sure that my stay at the island wouldn’t be the same without those people. 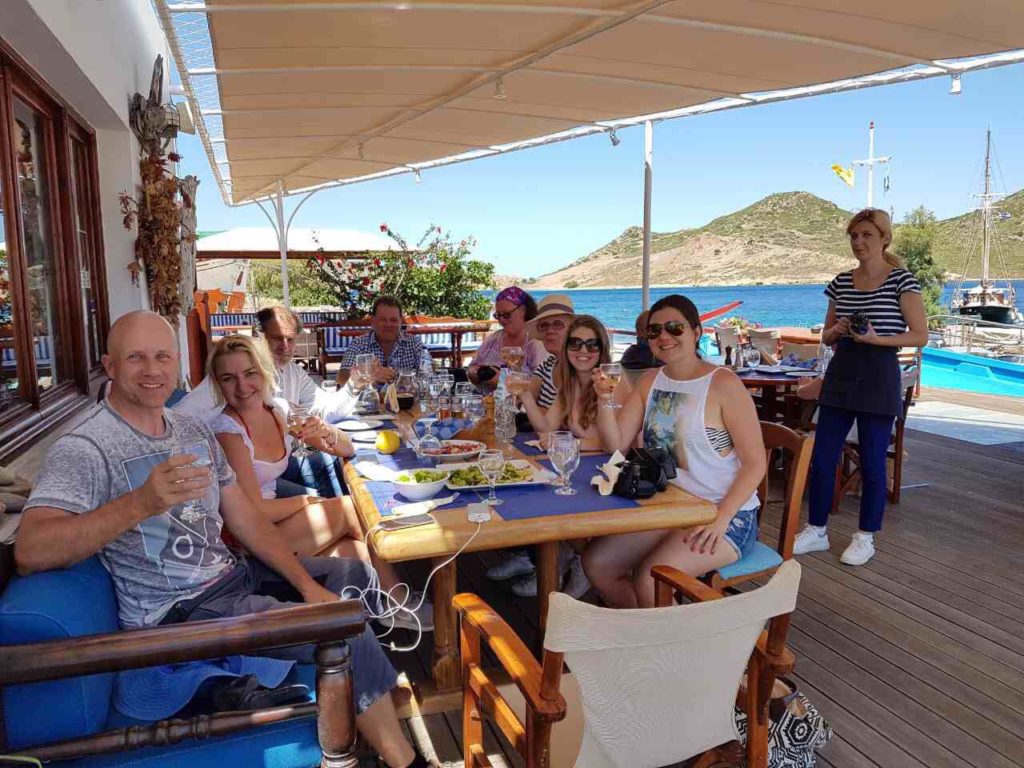 If I tell you that I am done with the reasons for visiting Patmos it will be a huge lie. I truly recommend you to visit this island and add it to your bucket travel list!  The perfection of the white little houses, the coastlines combined with tasty food… I know that Mykonos and Santorini get all the praises, along with Athens and Crete, but there are some amazing hidden gems that nobody gets to see and that might be even worthier! This island is one of them. It became one of my favorite islands in Greece, and hopefully, I will be back soon.

It is the place to live the illusion of perfect Mediterranean life, don’t you think so? 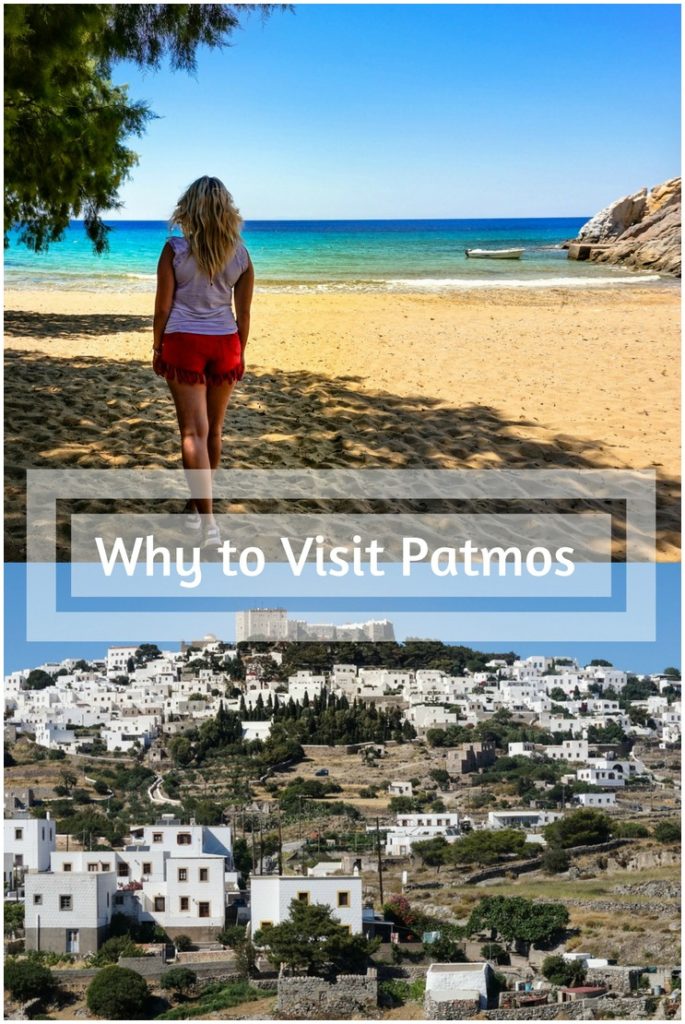 During this trip,  I was a guest of the Municipality of  Patmos, but as always all opinions stated in this article are based on my own experience.