When I heard about Follow Up Siberia program, I couldn’t make my fingers away from the keyboard. Probably for one day I went all over Siberian‘s most popular places and attractions. Russia’s most visited national park is located right across the river from Krasnoyarsk’s city center. Yes, I was lucky! Krasnoyarsk is a host of Universiade 2019, which was actually the reason of my trip to Siberia. Aside from it being a convenient stop along the Trans-Siberian route, Krasnoyarsk had one other particular thing to recommend itself – the Stolby Nature Reserve.

* Stolby is the plural of the Russian word ‘stolb’ meaning ‘pillar’, and refers to the incredible rock formations the park is known for.

It seems a little crazy that a stunningly beautiful national park could be located so close to a city. A cheap bus ride 30 minutes long takes you to the place where you can start a walk to the reserve, or take the chairlift at Borbovy Log Ski Resort. From Borbovy log ski resort, there is around 7 kilometers track till the visitors center.

Time and time repeatedly, I was told about place that I'm going to, that it is "unsafe" and pretty "dangerous". That's what happened when people told me that I will be frozen at Siberia or attacked by the bears. Well at the end I was only attacked by speechless views and the sun. Next time when you hear the stereotypes about places you are going to, close your eyes and enjoy it! The only dangerous thing in Siberia was that I fell in love with the nature and wouldn't mind to stay here a bit longer. 💙 #followupsiberia @followupsiberia 📷 @bezerra

As planned by my hosts, I had a chance to do both things. The first day we went uphill with the chairlift and had a first glimpse of the park. The second day the excursion started early in the morning.  The cars are not allowed inside the park, so our guide, Svetlana, welcomed us at the entrance. Because of the peculiar landscape Stolby became the local center of cliff-climbing. Svetlana told us that the original way of cliff-climbing invented by local sportsmen (called “Stolbisty”) was acclaimed worldwide. Every weekend there are a lot of people in the park and it is a great place to take a break from the city. 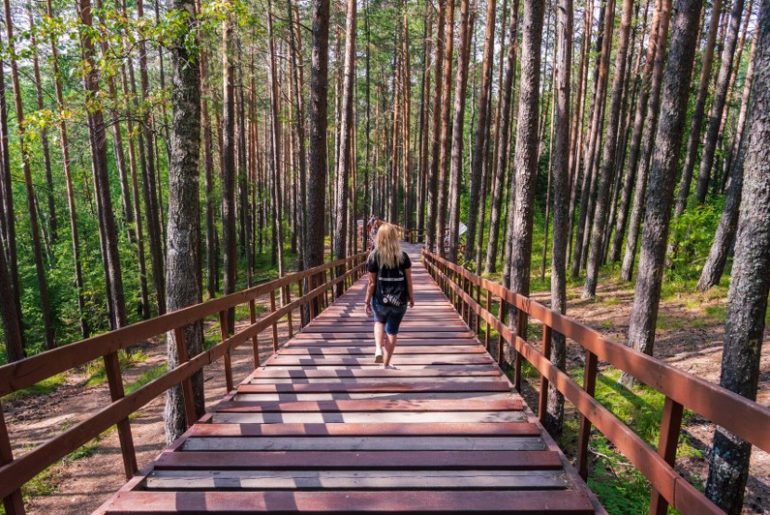 With the Stolbist spirit, and a lot of expectations, we started. It is easy to walk around the park as the routes are marked on the trees, yellow, purple and the blue. We took the blue route. Some pillars were relatively simple to scramble up and around, while others clearly required a bit more experience.  If you are not into climbing, you would love the hikes. 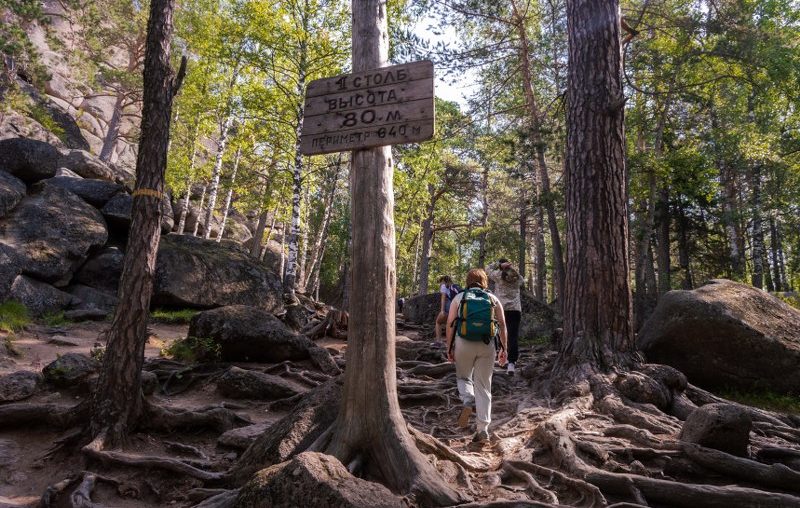 Just on the first talk break, we met the governor of Krasnoyarsk, having a day in the nature. Not to make someone discriminated, but I thought, if this Mr can do it, I can do it too!

As we were moving towards the main formation we saw experienced rock-climbers in full gear making their way up the sheer cliff-faces of some, while other groups nervously hung onto ropes. For me though, one of the coolest things about Stolby Nature Reserve was the wildlife. In particular, the squirrels. They were just so damn cute! We don’t have squirrels in Serbia ( or I didnt see them) so they’re a bit of a novelty. Still, a few posed conveniently for photos for me. Feeding the squirrels and birds seems a common activity for kids there, so there was plenty of seeds around for them to stuff their little cheeks with. 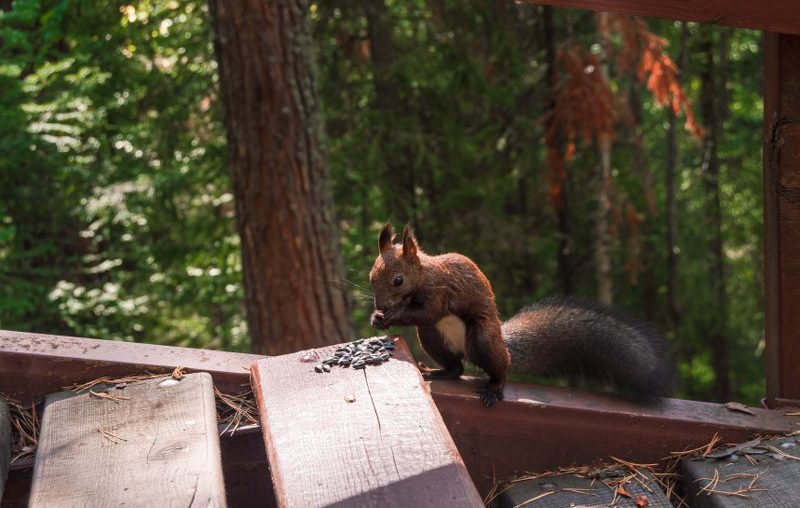 A calm walk passed away and someone screamed – there is a grandpa! 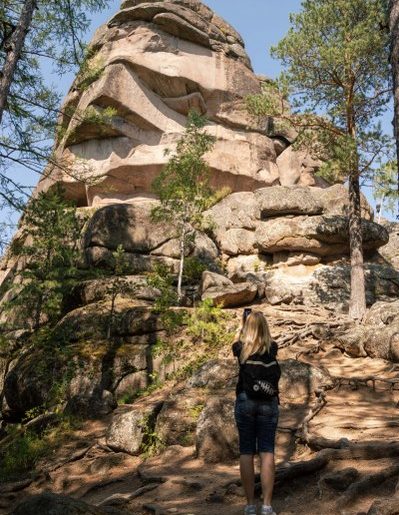 In order not to be alone, the locals have made the whole family. Therefore, beside the grandpa, there is also the grandson and the grandma.  The first challenge was to climb the grandpa. 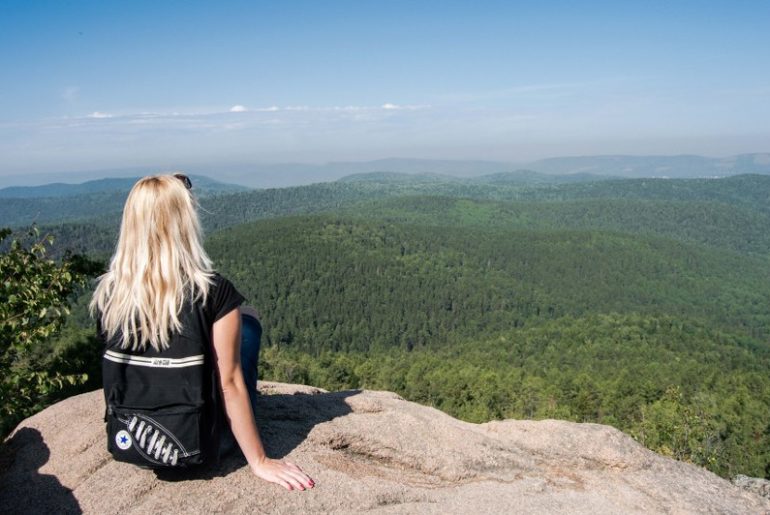 That moment I wished to have my closest next to me to share this!  Svetlana told us that it got name “grandpa”, because it’s a lot like an old man’s face from the side.  As any old man it has a cap on his head and a beard, sometimes interpreted as a shoulder. The beard (or the shoulder) is easy to climb but the way to the cap on top is fairly hard.  I made it till the shoulder from which point could be seen a big part of the Reserve and Krasnoyarsk far away. 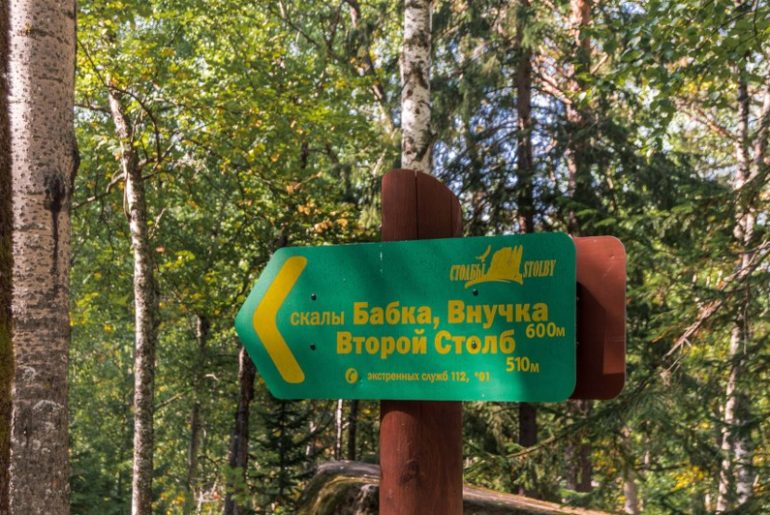 We didn’t took the road to the grandma, we decided to go till the famous Krasnoyarsk Pillar or the Feather.  A huge stone stuck in a crevice makes a sort of a doorway. There is a legend that the stone is awaiting a sinner and will drop on his head as soon as he gets beneath. Sometimes, veteran climbers pull someone’s leg by bringing him or her under the stone and saying: “Hush! Or it falls down!” And imagine that it occasionally works!

Well ,I know many were thinking, how come this rock got stacked there? The answer is the nature did the job. It is the result of pulsating magma forced up millions of years ago from deep below the earth’s surface.

The whole track was about 7 kilometers or at least that’s what we are told.  Till the third and fourth pillar everything was going like a milk! And then the struggle started. At the same spot we met Stolbyst, who gave the power to our host Victoria to continue the road. As we stopped for a while to chat with him, I used it as an opportunity to rest. The rocks were slippery and the rock tunnel we passed was a pretty tight. 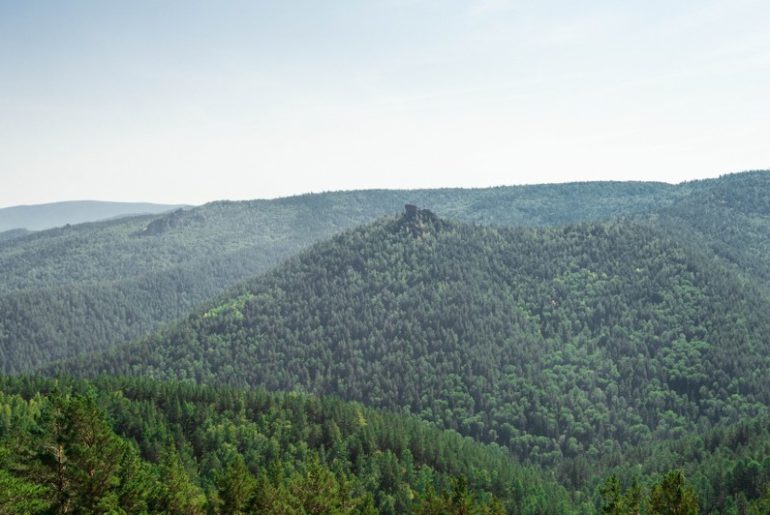 If you do not have experience, neither a proper clothes and bottle of the water, it is not recommended to climb. Indeed, for a moments, I didn’t have air.  What is there so much beautiful that I am running to see? Is it worth of it? Why we humans make our life so complicated and we always hunt for those far away destinations? I had a thousand questions in my head.

Thanks to Jessica from the group who gave me a bit of water and made me to continue. To not quit. Otherwise, I would be sorry for missing the opportunity to see the colors of the nature in a real painting.  I felt like being at the top of the world! 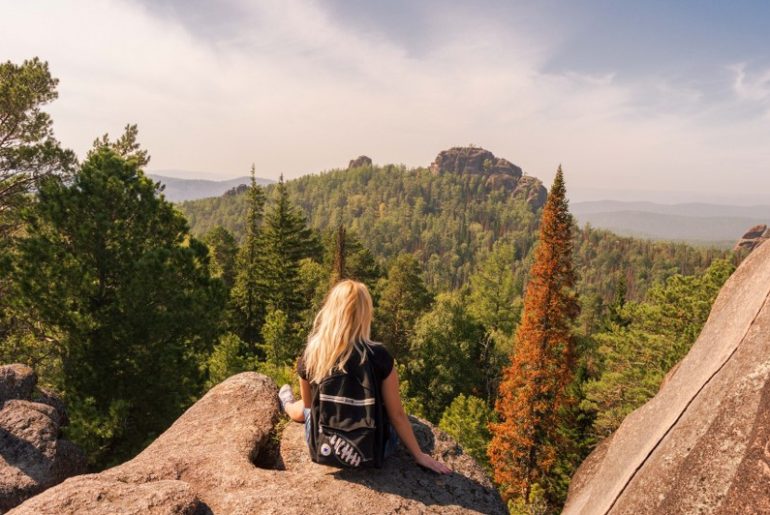 More than achieving the climbing challenge, was the fact that I didn’t give up. I made it to that Stolby Pillar that we even learned about in the schools. May I send this photo to my elementary teacher? I would wrote him, I know what is Tayga forest.  From the school I remember that Stolby has been nominated to be on the list of UNESCO World Heritage Sites. Now I know that  the most important sights of the reserve are the cliffs called Feathers, Lion’s Gate, Grandpa, Grandma, First Pillar and Second Pillar. (all huge rocks got these names because of their unusual shapes) Central Stolby, the main cliff are is open to all, while the territory of the Wild Stolby area is restricted and not recommended for ordinary tourists. 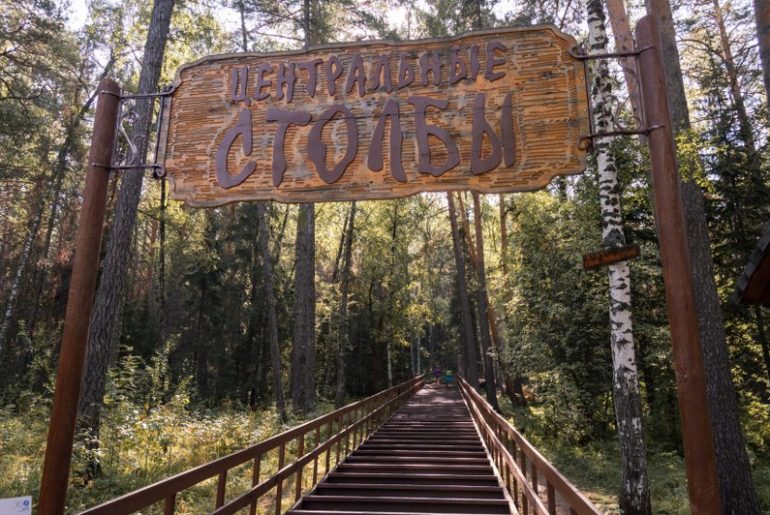 On the road back, I tried to sum up every single memory from this trip.Nature Reserve was undoubtedly the highlight of Krasnoyarsk, and, being open year-round, is somewhere that I would love to go back to in the winter.

Well I am not sure, if  I will make it this winter, but you can do it! Just join the Follow Up Siberia contest.

And if you win, do not forget to send me the photo from the White Pillar!

“FOLLOW UP SIBERIA!” was launched by Nornickel to provide an opportunity for people from all around the world to visit Siberia. The goal is  to get to know the cultural, educational and sporting traditions of this region prior to the 29th Winter Universiade in Krasnoyarsk (2019). Check their website and find what you should do in order to be considered as one of the participants. 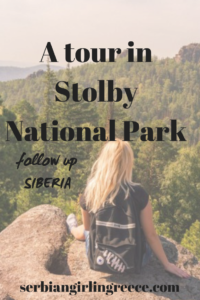 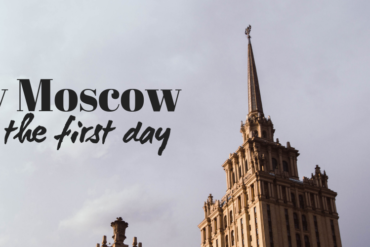