Every year many people decide to make the journey that St Paul did. Visiting Kavala, I couldn’t miss the chance to follow the St Pauls’s steps. Kavala is the city where St Paul landed and began this part of his missionary journey.

A few minutes away from the hotel where I stayed,  there is a church of St Nicholas. Behind the church, there are pillars which are said to be the ones that Paul tied his boat to when he landed here. And behind the pillar is a lovely mosaic. Today, here is a pretty fishing harbor, busy with men repairing their nets for the next day. It is wonderful to be in this city and learn more about significant history. That’s why I was so excited when we continued the trip towards Archeological Site of Philippi. Philippi got its name by Philip of Macedonia who extended it magnificently, until 42BC, when victorious Octavian made Philippi a Roman Colony.

French archaeologists have been excavating Philippi since 1914, uncovering the earliest 360BC settlement, around reach deposits of minerals, with timber & fertile land too. The excavations have brought to light ruins from the Hellenistic, Roman, Byzantine and Paleochristian period.The octagon, the Roman forum, the Paleochristian basilicas and parts of the city walls, are some of the most well-known.

Visiting Kavala I couldn't miss a chance to follow the steps of St Paul. ? Are you up for historical adventure? Pop by serbiangirlingreece.co

After the lavish history lessons, I decided to make a short break at the Basilica B’. Paul Lemerle, the archaeologist who surveyed the site, proved that Basilica ‘B’ was never completed. The reasons were neither the incapacity of the workmanship nor the lack of materials. Later on, It was shown that the building was constructed on the foundations of a previous building. Being here, made me think about the people who were living here in this period. What would they say if they see me with the camera, phone and selfie stick now? 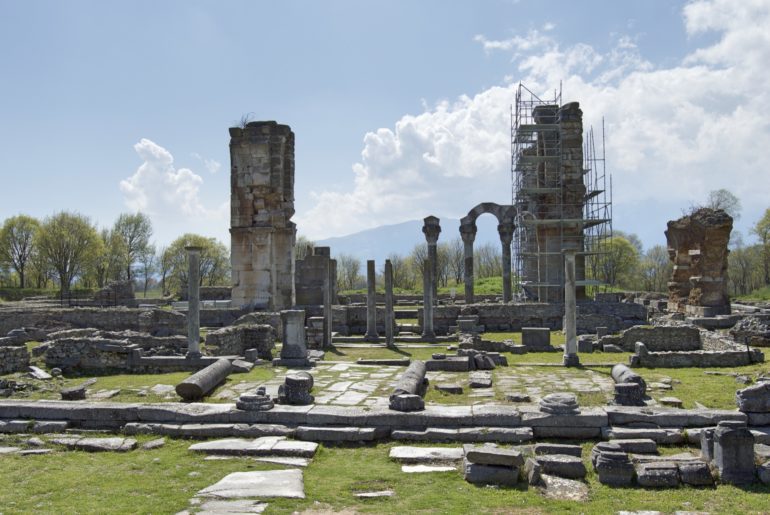 If you are passionate about history, my advice is to wear comfortable shoes, to take a bottle of water and make few hours free for this Archeological Site. But let’s go to the museum! On the way to the museum, I learned a story of St. Paul’s arrest, beating, and imprisonment. Philippi was the first “European” city that Paul evangelized as he came across from Asia Minor. There he met a slave girl, who has been possessed by a spirit and she could predict the future. She earned a great deal of money for her owners by fortune-telling.This girl followed Paul for many days shouting that St Paul is a servant of God. At the end, St Paul made a girl be free of the spirit which caused the problem. When the owners of the slave girl realized that their hope of making money was gone, they seized Paul and dragged him into the marketplace to face the authorities. They brought him before the magistrates and accused him to be Jew who is throwing the city into an uproar by advocating customs unlawful for Romans to accept or practice.  After this St Paul was imprisoned but he managed to escape with the help of earthquake that causes his cell door to open.

And here we are! The Archeological Museum of Philippi is built in 1961 and it includes four major collections of finds from the prehistoric settlement of Dikili-Tash, from the Hellenistic, Roman and Early Christian city of Philippi. 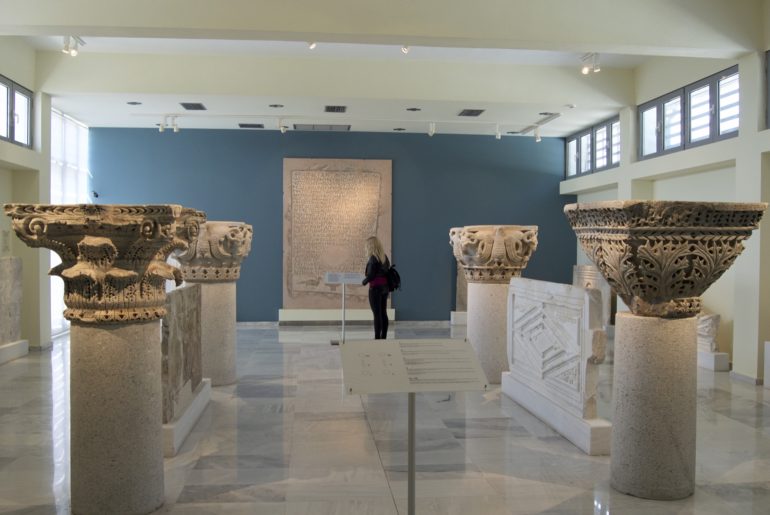 Besides many things, here you can find the hand made pot from the settlement of Dikili-Tash (4000-3000 BC) or marble portrait of Lucius Caesar – the adopted son of Augustus (dated to the Roman period). The lady from the museum took me for a trip in the past telling me passionate stories about the events that occur here. A bit more history! There are few events in world history that are “game changers,” that change the course of human history and civilization. Several ancient historians said that The Battle of Philippi was one of those game changers. The motivations to fight were different on each side. The Liberators were fighting for liberty, their republic and freedom from tyrants. The forces of Mark Antony and Octavian were fighting to revenge the death of Julius Caesar, to claim the property of their enemies, and for their pay of 20,000 sesterces. But the ulterior motive was to rule the world!

Sadly, it came time to leave this place. I am sure I will be back during the summer when the annual Philippi Festival takes place. Before we finish our day with the taste of Greek food, one more destination is on the list for today. 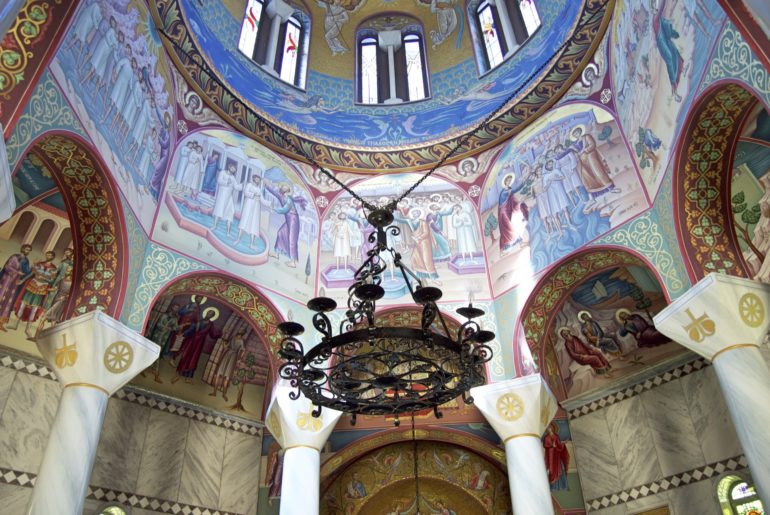 In the village of Lydia next to the Archeological site of Philippi, there is the baptistery of Saint Lydia. Lydia Purpuraria was born at Thyatira, a town in Asia Minor. She became Paul’s first convert to Christianity in Philippi. She was the first European Christian to be baptized and is honored as St. Lydia the Philippian, celebrated on May 20th. The Orthodox Church proclaimed her Saint equal to the Apostles. In her honor there is a Saint Lydia an impressive octagonal church – baptistery decorated with fabulous mosaics and stained glass. I enjoyed being inside the church! All those colors illuminated by the sunlight!

Amazing day! I also learned that the excavation of the Philippi site is still in process. So anytime you visit this place again there is a chance to see something new! The Philippi archeological site lies around 17km from Kavala so it can be the perfect day to escape during your summer holidays. Let me know if you plan to arrange a “rendezvous” with the history of three worlds: the ancient Greek, the Roman, and the Byzantine- Christian. What an immense wealth!

Now it’s time to go back to Kavala and enjoy the food! There are many tavernas around so I guess you will not make mistake if you visit any of them, but this time my choice was To Paraliakon place, exactly next to the hotel where I stayed.

Have a rest, guys! Looking forward to taking you to the next adventure…