The day we set off to visit one of the most beautiful beaches of Andros, the smell of rain was in the air.  That freshness bordered with a chill. The road, the only road that exist, full of rocks and troughs jolt us around. I was afraid to speak as just sitting in the car was frustrating, cannot imagine how was to drive till there. “A church! There is a church on the map! ” I guess that people were passing by here, we were not the only ones. My partner told me that Karolos, our islander guide,  said that locals are visiting this beach pretty often.

Enjoying the absolute silence of Greek island 🏝️ If you want to visit one of the most beautiful Greek beaches, Vorri, you will need to pass the whole mountain to get there. However on the road you will find many beautiful sights that your camera needs to be ready! I didn't want to miss even one breathtaking moment 😍 📍the church is called Saint Isidoros #chooseyourpath #my_andros

We have continued the ride. The sea was so close to us but again so far away. I cannot imagine someone walking this road, it would take hours to arrive. There is even a shipwreck, it is just below us. It should have the road down, but people are also visiting it with a small boats, like a daily excursions. Karolos said that they are all based at Chora. 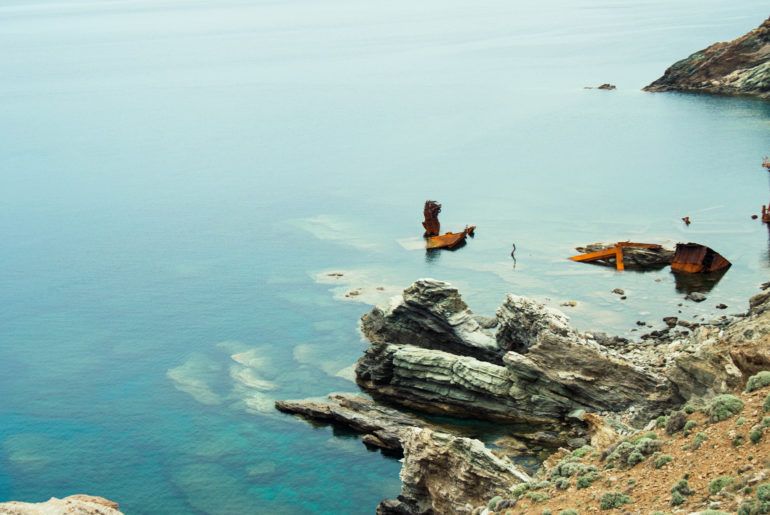 I have no idea where my anxiety has gone.  I stopped to care when we will arrive, to ask various questions to kill the silence in the car, and started to enjoy the view and that moment.  We passed those narrow roads full of dusty fog, through the river between the jungle plants. It was an adventure. When we realized that there is no signal on our phones, we saw the beach, called Vorri. 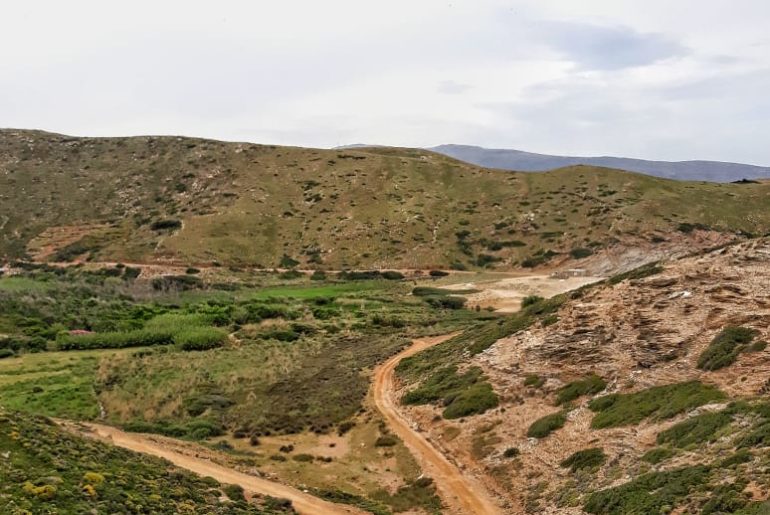 Completely abandoned piece of paradise. We laughed as we saw that the land nearby is owned by Ms Maria. She put her plate there, just in the case you were thinking to settle down – it is already occupied.

The sea is luminous, molten turquoise. The only other visitors are a middle-aged couple, hands entwined with their friendly dog.  It didn’t take long and they left. It was only us and the sound of the sea. The shade of water has changed withing the hours.

Treasure island 🐚 It took us indeed about an hour of driving, through the whole mountain, but it was worth of it! There were moments when I thought that it would be better to return back to Chora, and visit some other beaches. Yes, Andros has a lot of little undiscovered gems, you just need a good guide to discover them! Would you prefer those far away abandon beaches or more organized ones? 👇

Karolos also recommended us to visit few more beaches. The island has more than 20 spots but his list included Zogrkos, Vorri, Achla, Chrissi Ammos, Ths Grias to phdhma ( the whole with the purpose),  Ateni, and Paraporti. We made to visit only two of them, the rest are for the next visit.

After the beach we decided to visit Ormos Korthi . It is another bigger tourist town of the island. Here it feels more like the 1950s. Children wave as you drive. Shaggy goats have siestas on the road. At primitive pit stops – just a few plastic chairs and flowery tablecloths set out on a family’s porch – grandmothers shuffle off to the garden to pick tomatoes for a Greek salad or a delicious lemon juice.  At just under 7,000, the population is so small you see the same faces again and again. Karolos told us that nearby Korthi there is one castle and that from there you can have an amazing view. Instead of enjoying the view, we prolonged the road to Batsi. 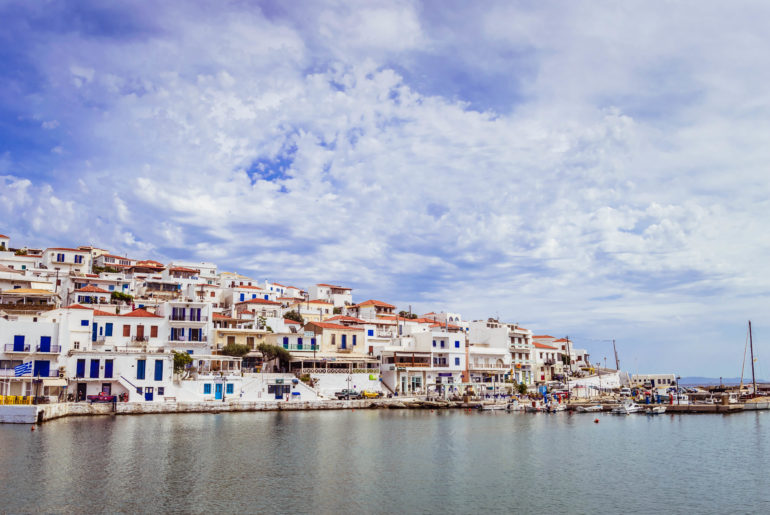 It used to be a fishing village. It has now become the most touristic place of Andros and is therefore the major resort of the island. Despite its touristy character, Batsi has kept a traditional and picturesque charm. 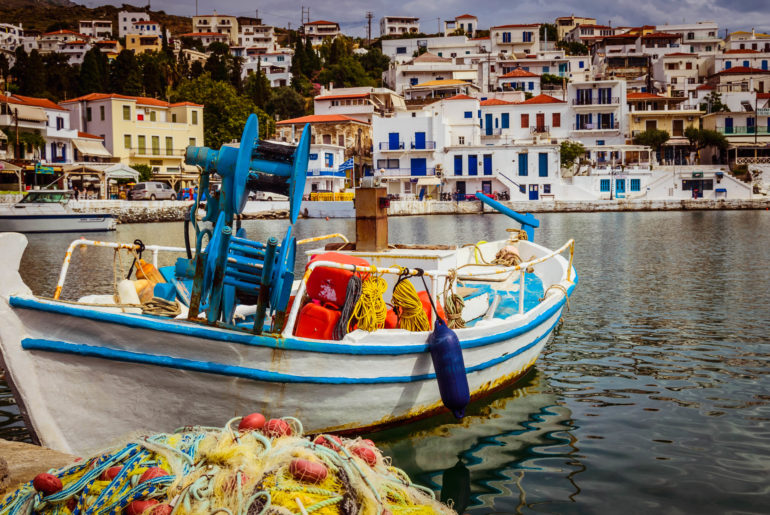 We did stroll a bit.

"Still round the corner there may wait, a new road or a secret gate."

Stumbling out into the fierce sunlight, I dance upon a footpath that leads to Oti Kalo tavern.  My stomach already memorized the starving song, so it was time for food. The smile of the waitress was a sign that I will like this place. She introduced me the menu and suggested the plates of the day. 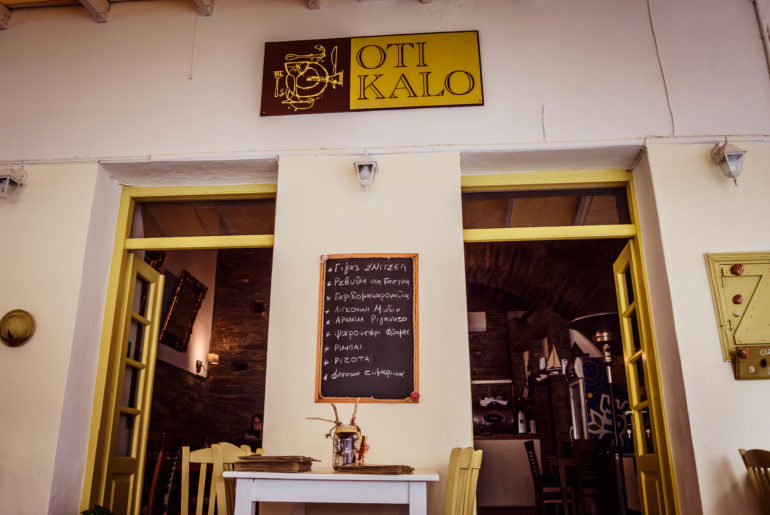 It was the moment when Ms Maria , the owner came to suggest their homemade wine. “It is from Peloponnese, we are coming from there.”  The couple came to Andros for a holiday when they realized that they would like to settle down there for a 6 months during the summer. As they are already experienced in tourism and hospitality it was a natural for them to open a restaurant. I couldn’t resist not to ask her what is her favorite part about this island – when she told me that it is the attitude of people. That is what she is trying to show with her dishes as well. She wants that people feel love, happiness and tranquility. To enjoy the meal and the view, having all problems left behind. 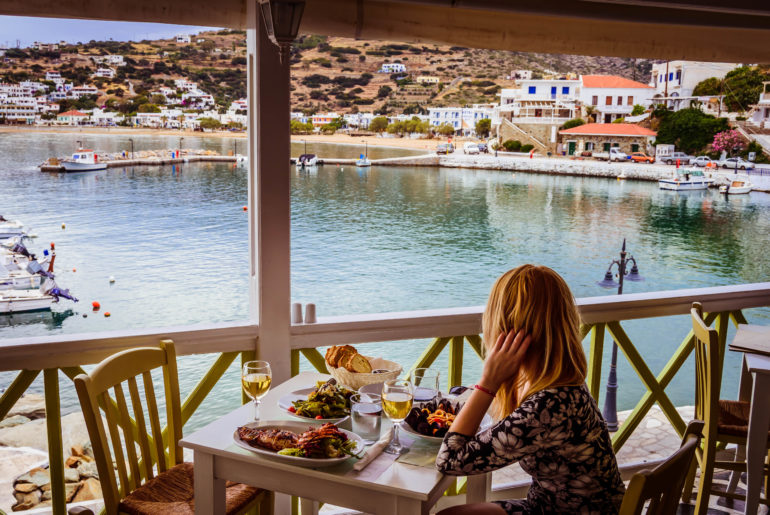 I can tell you that she managed it! My plate of shrimps pasta was empty after few seconds.

She left the restaurant before I had chance to say goodbye. Maybe it was the sign that I’ll see her again.

Being at this island you can also visit the Olive Museum and the Archaeological Museum. You can check my experience at the Museum of Contemporary Art in my other posts. On our list to visit were the monasteries but at the end we didn’t make it. If you are seeking for religious tourism, this island could be on your list.

This island is more than a party island. It is more than a place where you can just spend holidays. It is a place where you can dive into Greek culture. As I mentioned before this island is out of radar for tourists as the locals didn’t want to change their life for tourism prosperity. They wanted to keep making their own sausages, their own honey, to spend their summer nights around family. That is the reason why our friend Karolos fell in love with this place, and later decided to make it his home. We met him while we were visiting Menites area ( in my other article), when he draw us the map and shared with us those destinations we shouldn’t miss. That’s why I am dedicating this article to him. His words made me to think what is that what makes us to have stars in our eyes, to fell in love with the place that it is not our home? 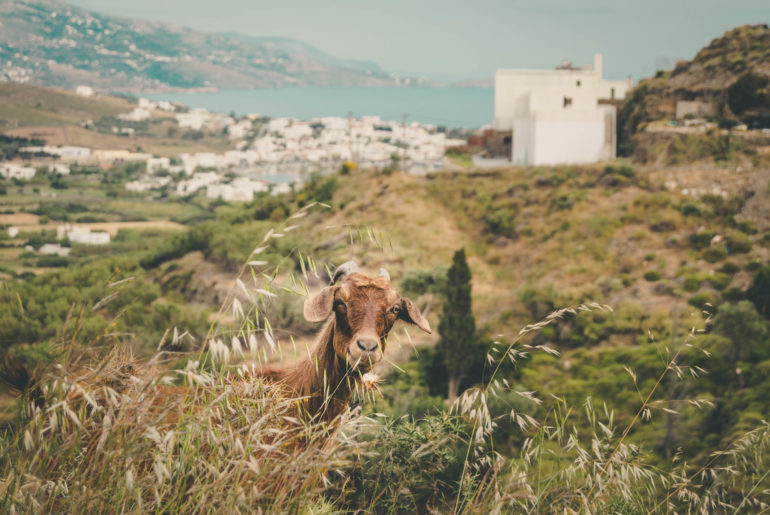 If you are interested in natural sights of this island check  – The wild side of Andros.

You don’t have to be a recluse to fall for Andros. There are plenty of cafe-bars where you can strike up friendships with strangers or locals. Most of those “fancy stores” are located at Chora.(my article about Chora) However, we decided to accept the invitation of our local friend and spend a night at one tavern with the live music at Gavrio. The atmosphere there is something different. A lot more crowded. People were dancing, celebrating the moment, enjoying the food.

Stefanos, an artist in a fisherman’s role, shirt knotted around his waist, joined us. The two men smoked, constantly laughing and sharing stories from the island. Everyone was singing. the traditional songs about life.  I asked if I can take a picture. ‘Go ahead,’ said Stefanos. ‘We are an ancient monument – like the Parthenon. The world needs to see this.’ 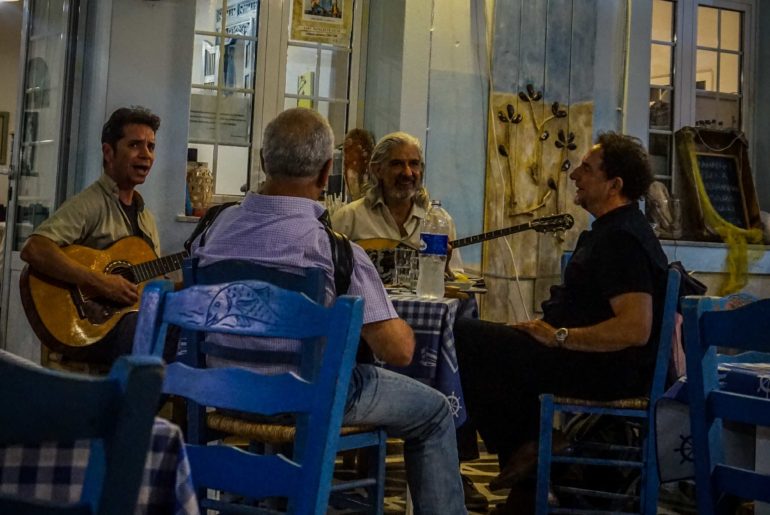 And I did. I made a video. As one picture can say a thousand words, but a video can make you feel it just like you were there.

He pours us shots of raki, blue eyes shining in the half-light, and raises a toast. ‘Friends forever.’

That’s how we left the island, with a new list of places to visit, a new friends and camera full of recorded memories. 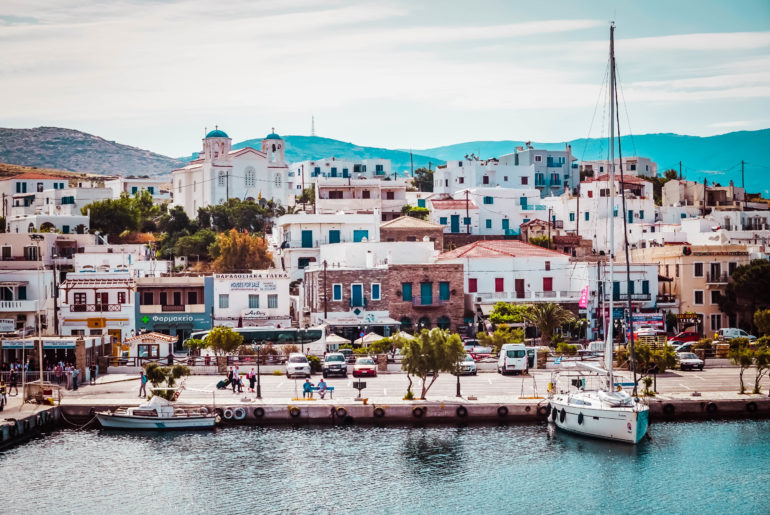 In about two hours we have reached Athens. Those two hours on the board of FastFerries were insufficient to summarize this experience. From the thoughts that this island is perfect for a couple of days but questioning what the young couple could seek there, till the thoughts that this is the perfect destination for vacation, enjoying the absolute silence and experiencing the Greek life. The fact that we were at the island just before the opening of the season may influence may stay.

What is your opinion? Have you been at Andros?

I would like to mention that I was a guest of Micra Anglia Boutique Hotel as well as a guest of FastFerries Andros. However, all opinions stated in these articles about the island are my own, based on the experience. 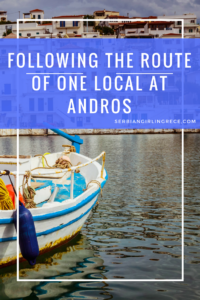