As a child I was watching all the time Greek mythology movies, later on, I started to be more interested in them and to read the books on the same topic. It can maybe answer the question why Athens is the city where I feel at home, the safe and secure, always challenged to discover more. 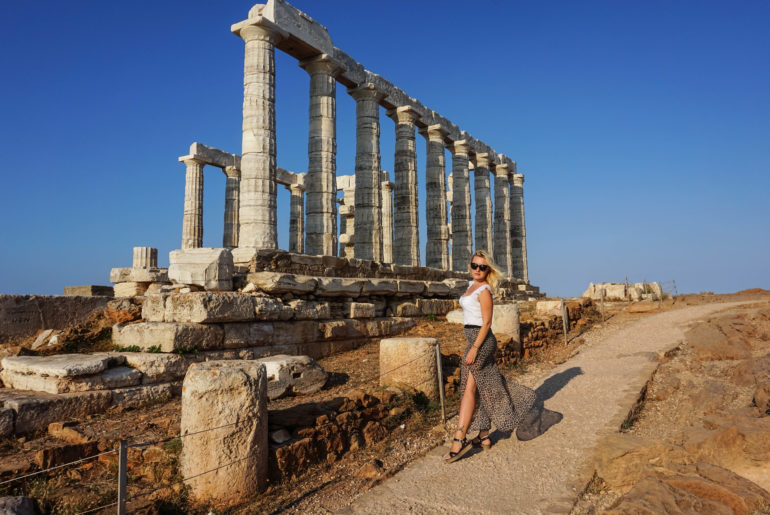 According to the Greek mythology, Poseidon was the God of the sea. He was well known as a “bad boy”. His mood was influencing the things he would make. For example, when he was in a good mood, the sea would stay calm and the new islands would appear, on the contrary when angered he struck the earth and the sea with his trident causing earthquakes and storms.  Moreover, he was one of the most respected and oldest Gods.

One of my favorite stories is connected to this site. The king of Athens Aegeus threw himself off the cliff at this place, because he thought that his son Theseus was dead. Every year the Athenians had to send to King Minos in Crete seven men and seven women as a Tribune. They were placed in a Labyrinth and they were eaten by a creature that was half human, the half bull called Minotaur. That year Theseus volunteered to go to Crete in order to kill  Minotaur. He said to his father that if he won on the way back his ship will have white sails, but if he was dead it would have black sails. Although he killed Minotaur the crew forgot to change the color of the sails to white letting the king believes that Theseus was dead. The Aegean sea is named after the unfortunate king.

The temple of Poseidon at Sounion makes a perfect day trip from Athens. It is located 69 km Southeast of Athens, at the southernmost tip of the Attica peninsula. You can get to Sounio from Athens either by Ktel ( public bus), by an organized tour, a private taxi or by car. The ticket costs 8 euros, and the reduced price is 4 euros. The students with ID card have a free pass.

After I arrived at the archaeological site, I decided to have a drink in the nearby cafe – restaurant and wait for the sunset. I was surprised by a number of tourists from different countries.  They were all fascinated by this site that acquired its religious significance from the 7th century BCE and had one temple dedicated to Athena and another to Poseidon.  Undoubtedly, I can say that this is one of my favorite places for a daily escape from the city! 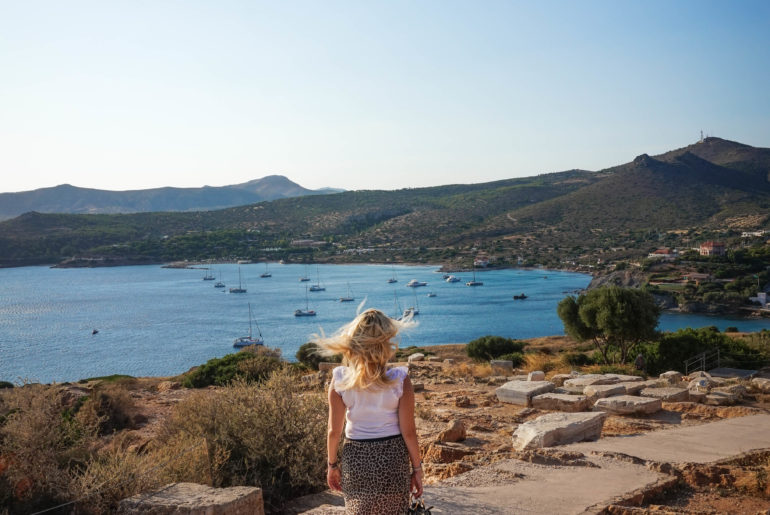 On the way back, after visiting the temple of Poseidon, I decided to visit the beach underneath the temple. The sea has crystal clear waters and is considered one of the best in Attica. This time as it was Saturday, was so crowded but luckily I have found a free spot. In case you are hungry, I suggest you stop by romantic tavernas on the beach at  Palaia Fwkaia. I didn’t taste them, but I saw that they have a variety of fish food.

Many say to come to Sounion in the morning and avoid the crowds but I may have to disagree. I think putting up with the crowds is a small inconvenience for seeing such an incredible sunset. What is your best time to visit the Sounion? Have you been there yet?

This post is written in collaboration with Daniel Wellington watches. If you want to get your @DW watch, you can use the code SERBIANGIRL and have 15% discount. Let me know what is your favorite watch from Daniel Wellington website  https://www.danielwellington.com/