I remember that we used as a family to come at the church of Saint Dimitrios with the tour guides. They were telling us the stories about past on which I didn’t pay so much attention. I was more interested in chit-chat with people.  Ten years later, I found myself next to the tour guide leading a group.  It looks like traveling back in time as the guide did the same theatrical part as the one before. He showed us how the gladiators used to fight at this spot a long time ago. Now I know the story and I want to share it with you. 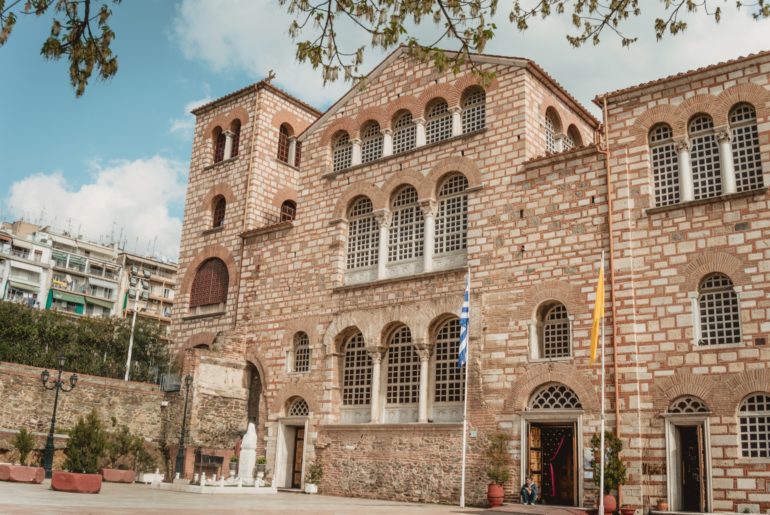 If you are in Thessaloniki, the church of St Dimitrios is definitely your destination to visit. Devoted to the patron Saint of the city, it has a long and rich history that pretty much depicts some of the city’s most important events that shaped its identity. 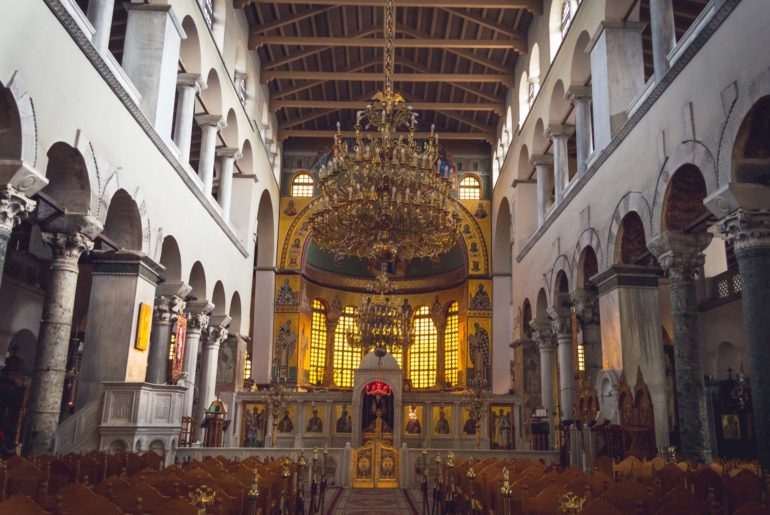 The story starts at 4th century A.D. when a small chapel was constructed over the ruins of older roman baths. More than a century later, the initial structure was replaced by a three-aisled Basilica,  while finally reconstructed at 7th century A.D., as a five-aisled basilica. Of course,  the initial architectural design and interior decoration was significantly changed, due to continuous reconstructions, additions and several disasters that occurred throughout the centuries. 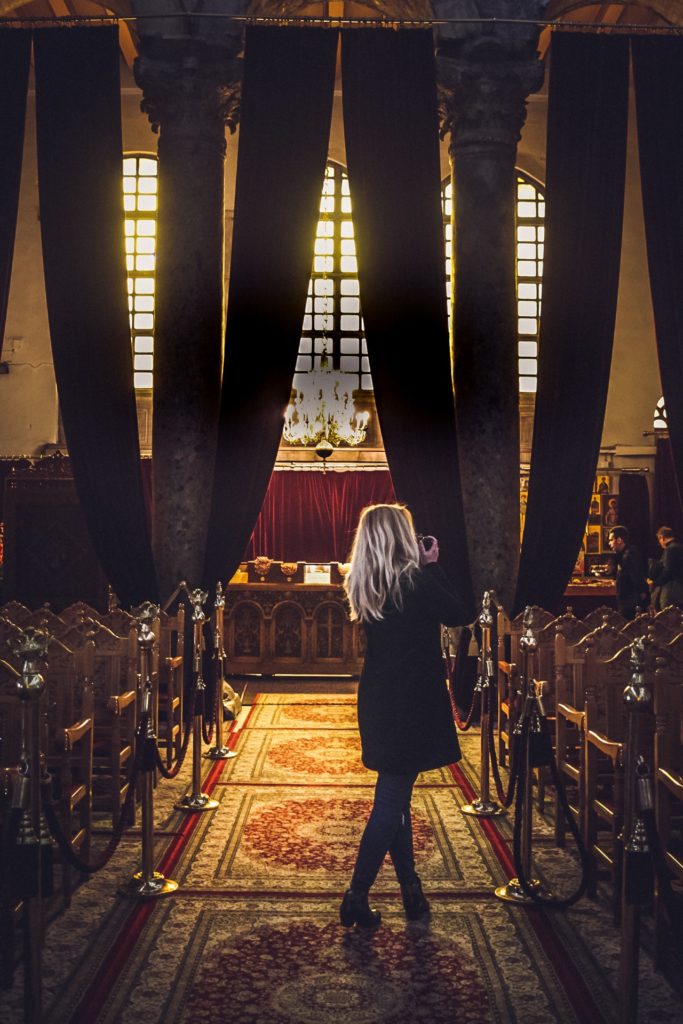 Strolling around I couldn’t ignore to see the different columns. They are decorated with flowing thistle leaves and rabbit heads and preserve us a Christian art of incomparable quality and aesthetics. They belong either to older buildings or to the 5th-century Basilica. The newest capitals used lately are distinguished by the white marble and the larger size.

When the city was occupied by the Ottomans the church was turned into a mosque. Unfortunately, a number of mosaics and wall paintings were destroyed. I learned that at that time a small chapel inside the church was left to the Christians to be able to practice their religion. There was one man who paid to the Muslims to take care of that part of the church. Those are not the only news from the past. Later on, many of adorned centuries-old artworks and features were destroyed during the devastating fire of 1917. But if it was not about the fire, the most famous and interesting part of the temple the underground ancient “Crypt” would not be rediscovered. 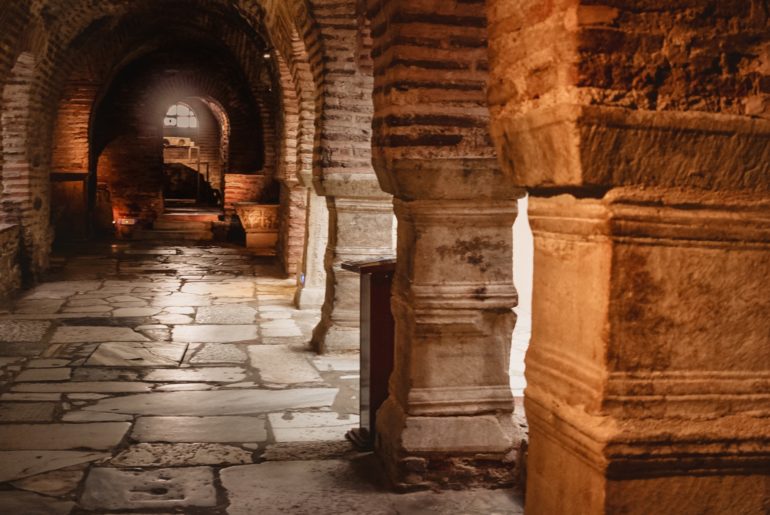 According to the Christian Tradition, the Saint Dimitrios was imprisoned and died here. There is a gossip that the ancient crypt is just a small part of a huge tunnel system that connects the Roman palace of Galerius with The Arch of Galerius, Rotunda, and the City Walls. Wouldn’t be amazing to discover it?

This is the eastern part of the large Roman bath that was close to the market and the stadium for servicing the athletes.  In the last Roman phase, the building had a fountain with five niches in the center, framed by galleries. Today the Christians are coming here taking the sacred water from the fountain.  Many believe that is coming from the well where the St Dimitrios body was thrown.

How  & When to visit

The church of St Dimitrios is located in the main center of Thessaloniki. It is easily reachable on foot. You just need to pass the Aristotle park and to continue towards the north. After the Roman ruins, the next parallel street above is the church.  Address: Agiou Dimitriou 97 St. Thessaloniki
Opening hours: 08:00-22:00, Crypt  08:00-15:00 Tue-Thu, 08:00-13:30 & 19:00-22:00 Fri, 07:30-14:30 Sat-Sun – The entrance to the temple and the Crypt as well is Free
Celebration: October 26
Rules:  In order to show respect towards the history and religion please do not wear shorts or sleeveless shirts 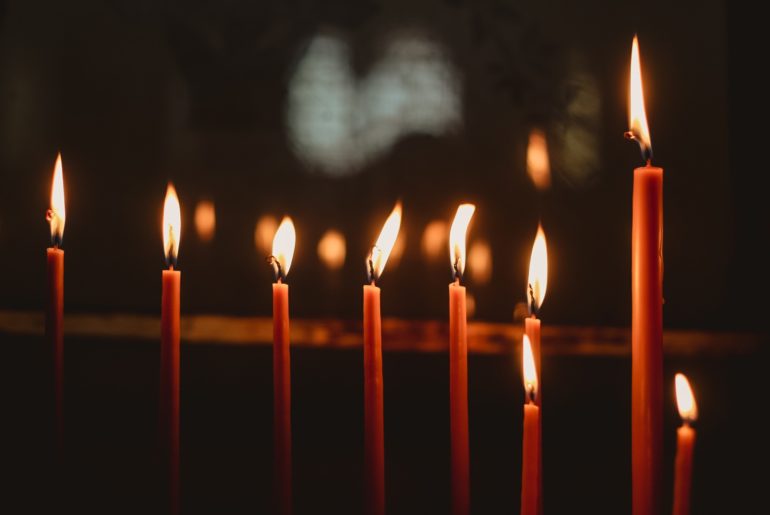 In the conclusion, it doesn’t matter what you believe in. The history is something that we all need to learn about. If you are visiting the church on your own, there is a chance that some group tour will be around. You can always sneak and catch up on the story. 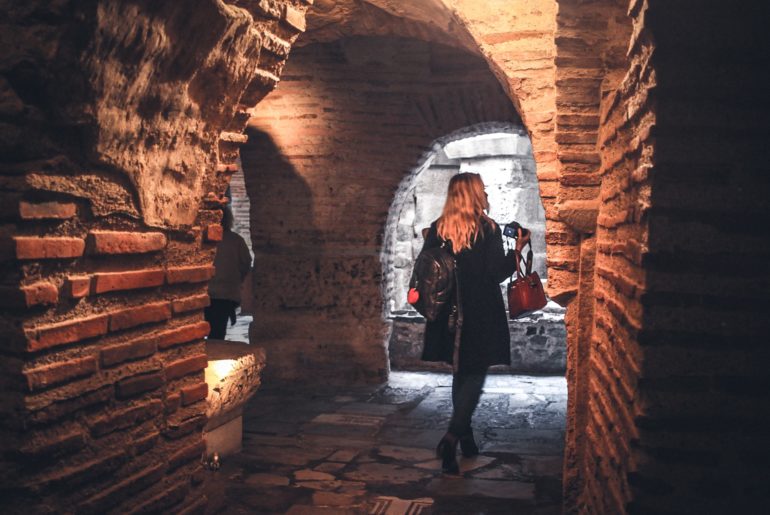 Have you been to the church of Saint Dimitrios?

I find the enveloping silence and cave-like gloom comforting. There I feel I am able to resonate my decisions. Too much talk?! Let me lit the candles and we can continue to our way. Do you have time for a coffee? Are you up for a visit to a nearby place that has more connection with this church than you can think of.  Let’s go there next! It is around a corner. 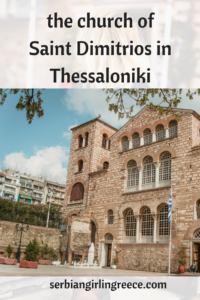