The first time when I visited Meteora, honestly I didn’t enjoy it so much. It was the whole day trip that included 8 hours in the bus and 4 hours on the site. I remember that I went home disappointed. The second time I revisited Meteora with their local agency Meteora Thrones and that time I changed my opinion. With the help of locals, I discovered the most important details and many interesting facts about this place! I felt that I’m at the place where I belong and that feeling was incredible! Have you been to Meteora?

Situated in the prefecture of Thessaly in Central Greece, Meteora is one of the most important religious complexes in Greece but also a place of unique beauty. If you are planning your visit, I truly suggest you oversleep either at Trikala or Kalambaka, the cities nearby Meteora. The story of this place started in the 9th century AD when a group of monks moved into the area and lived in caves on top of the rock pillars. During the 11th and 12th century AD a monastic state has been created in the area. Even though by the 14th century there were over 20 monasteries,  only 6 of them survived. Today, they are open to the public.

The Holy Monastery of Varlaam 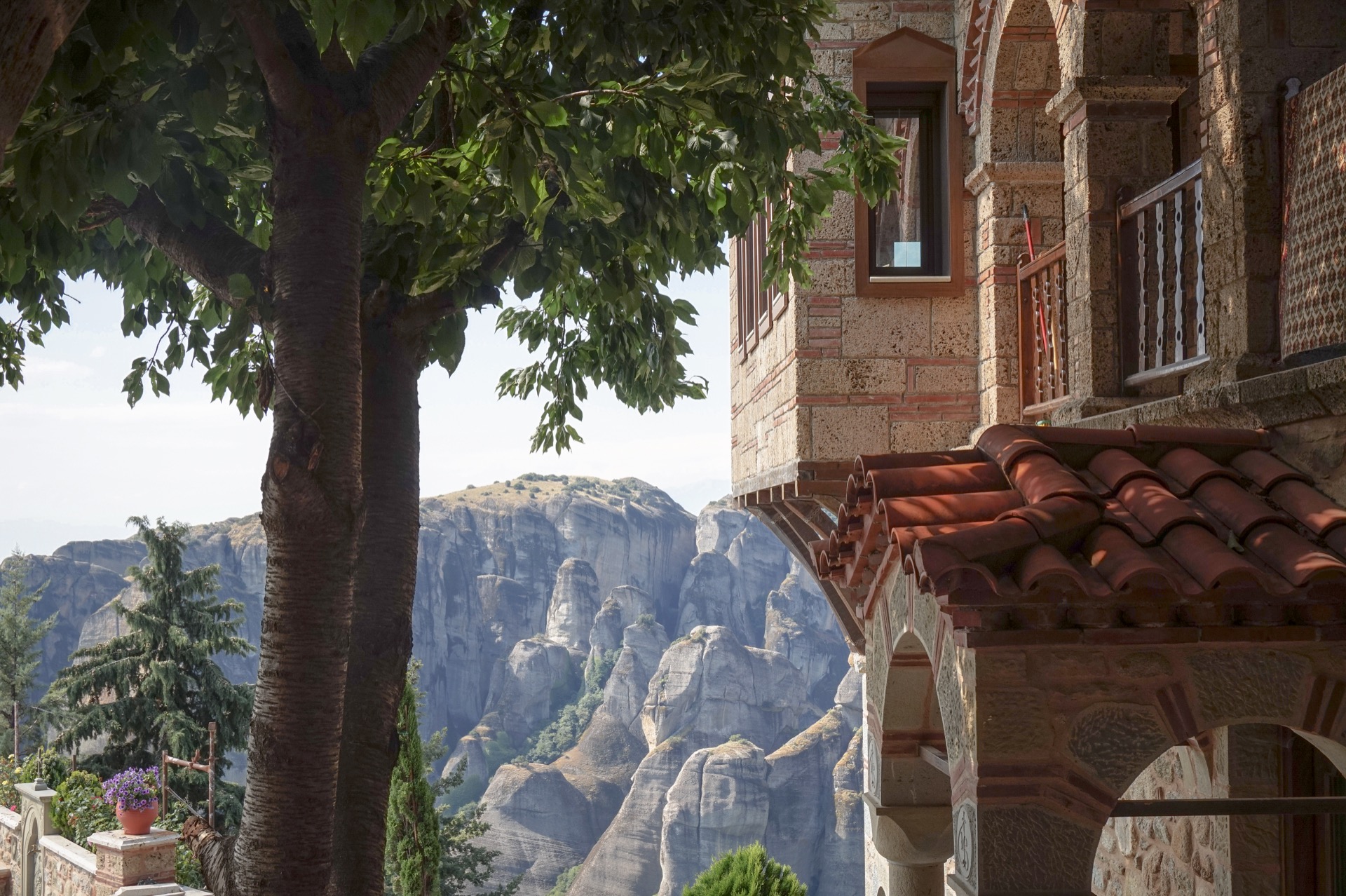 The Holy Monastery of Varlaam was the first monastery I visited at Meteora ever.  In that period my life was a bit chaotic. However, after the monk approached me and spoke to me I felt relieved. Since then, many good things have changed in my life! Besides, I learned that the first monk came to Varlaam in 1350. After his death, the place was abandoned till 1517 when two monks renewed the monastery.  Using ropes, pulleys, and baskets, it took 22 years to hoist all the building materials to the top of the rock. Once everything was at the top, the construction work took only 20 days. 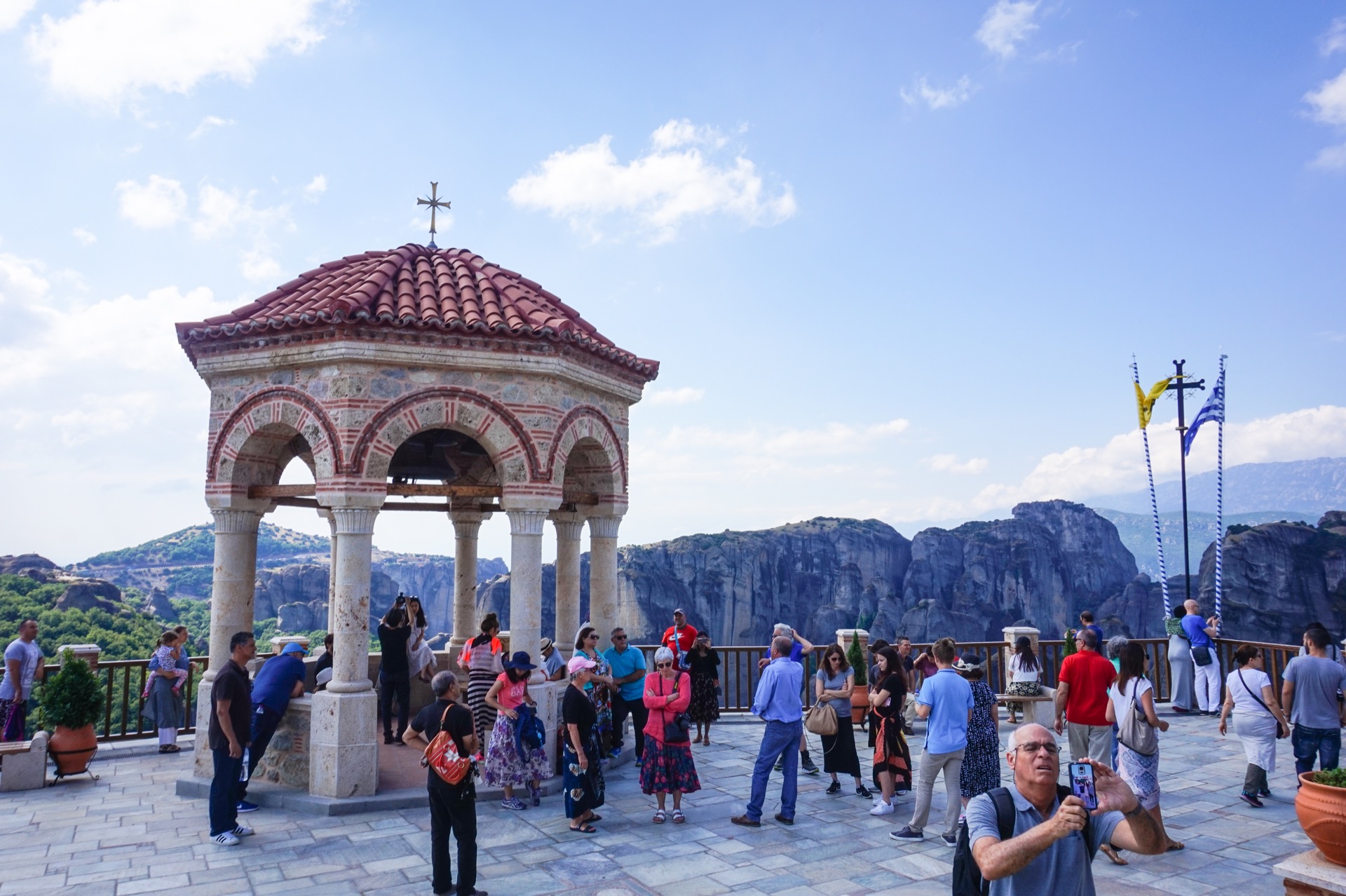 Today, Varlaam Monastery is occupied by seven monks and it can be accessed by a narrow bridge that runs from the main road. There is a pleasant garden in the compound, where a monk sometimes sits and chats with visitors.  Inside the monastery, there are some beautiful frescoes, a museum with ecclesiastical objects and also an impressive water barrel that used to hold 12 tons of rainwater. 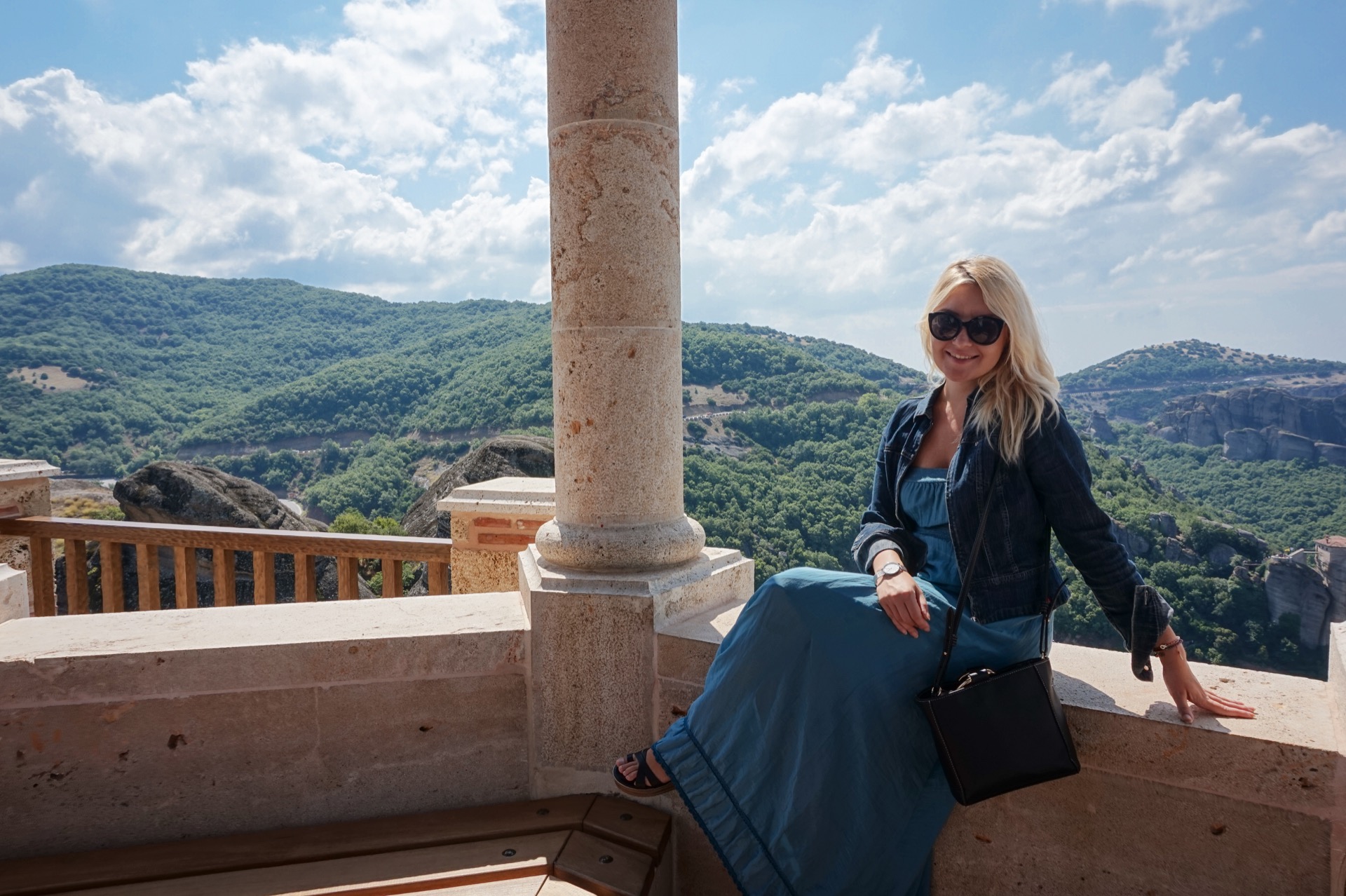 The next monastery is the one where I spent the most of my time. If you are planning to visit the Great Meteoron Monastery be aware that it can take your whole morning.   It is founded in the 14th century AD by a monk from Mount Athos, and it is the oldest, largest and tallest (615m above sea level) of the six surviving monasteries. Inside the church of Transfiguration, there are icons and frescoes dating from the 14th to 16th centuries. There is also a fascinating museum open to the public, the kitchen of the monastery, the wine cellars, and the sacristy where the bones of old residents of the monastery are stacked on shelves.

The Monastery of St Stephen.

After spending some time in the previous monastery,  I went towards the Monastery of St Stephen. Compared to the other monasteries in Meteora, it is easily accessible through a wooden bridge. There are two Katholikon inside the monastery. The old 16th-century chapel was damaged during WWII and the new one was built in the 18th century. It is dedicated to St. Charalampus. This monastery also has a small museum worth visiting and very polite friendly nuns who would tell you the history of the place. What I really loved about the monastery is the incredible view it has towards the valley of Thessaly. 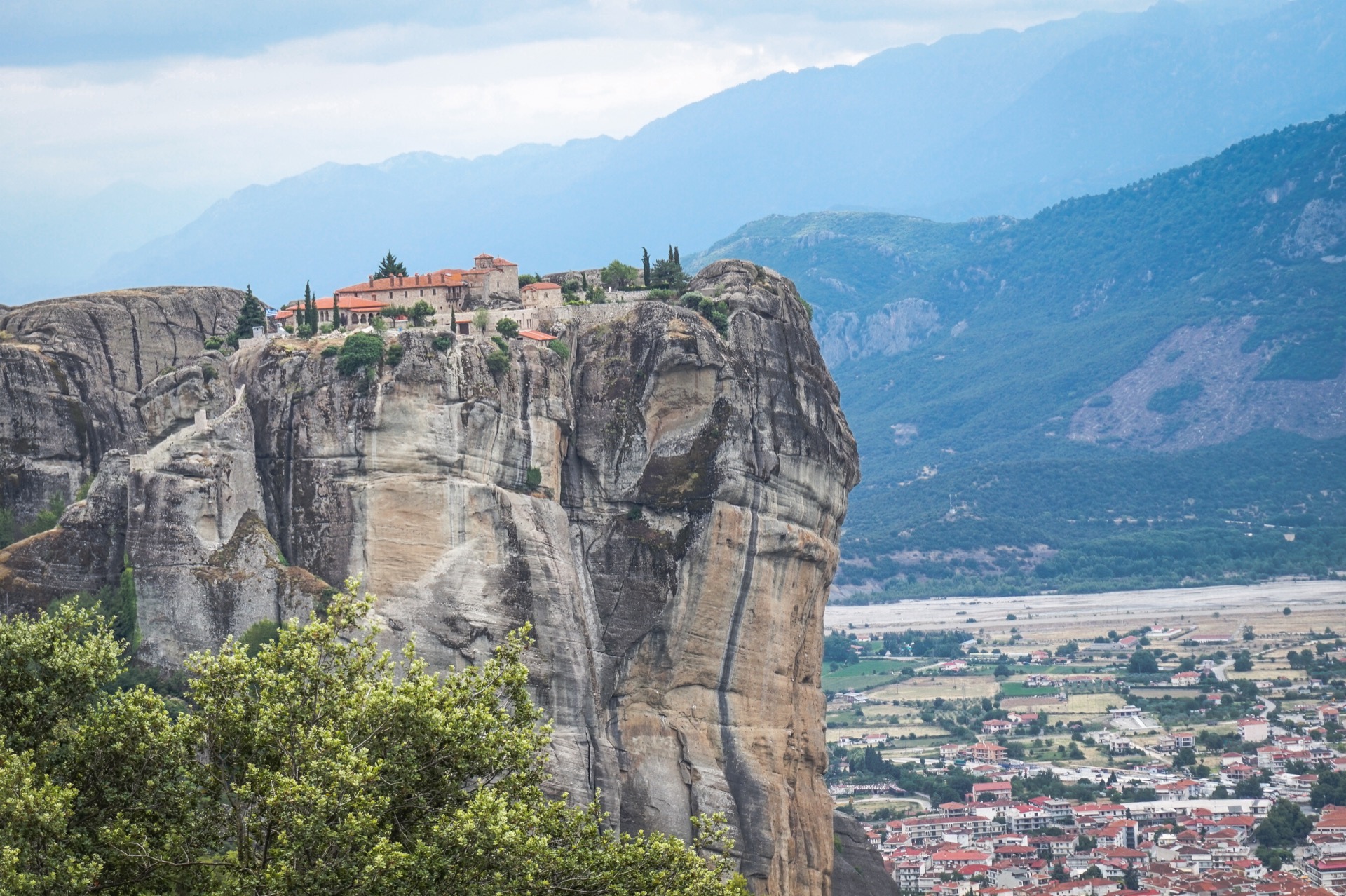 The second nunnery at Meteora is Monastery Roussanou. A few years ago I got the honey from this place and from that time it became famous within my friends as “a honey monastery”. You should not miss buying a jar! 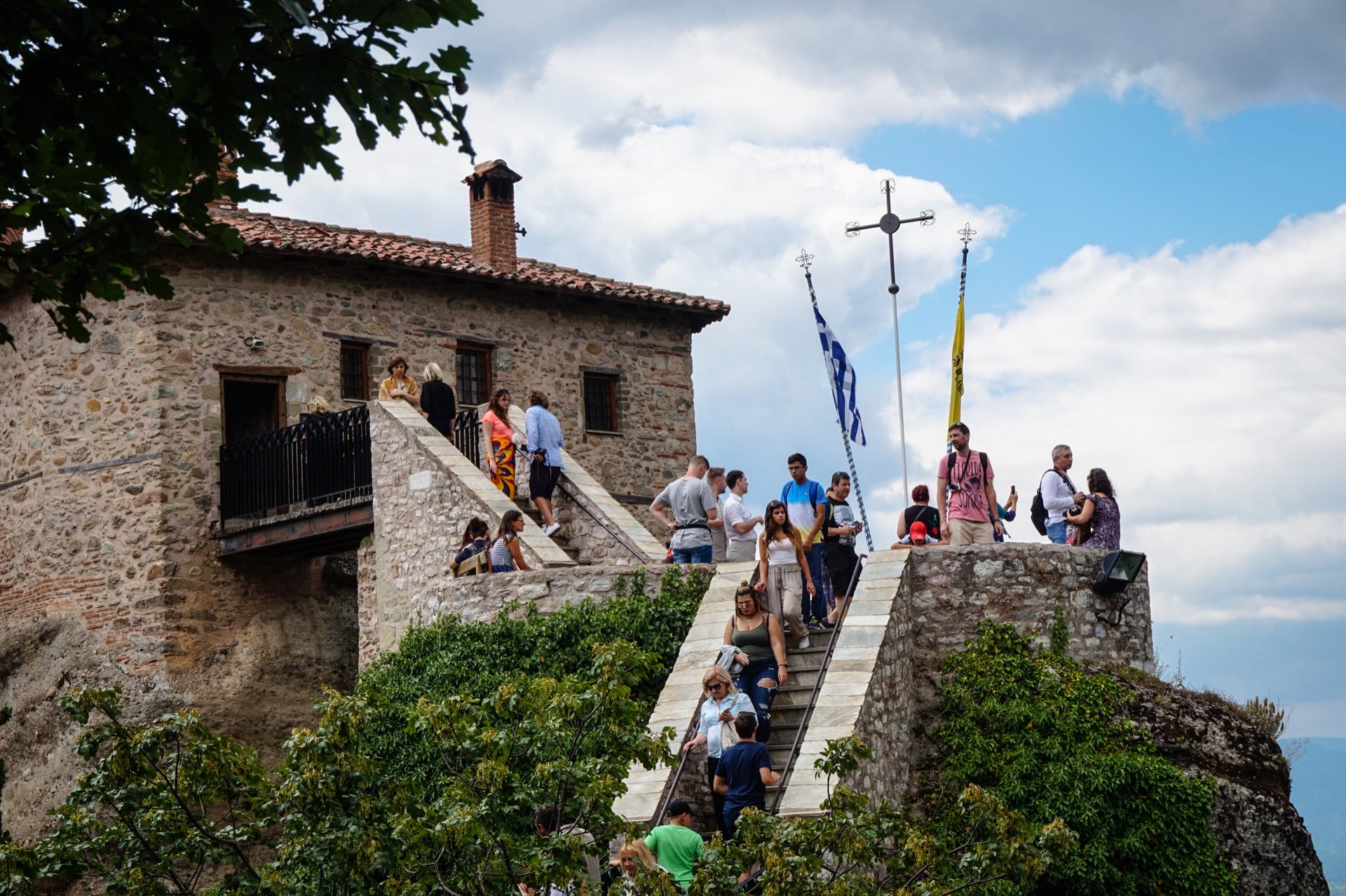 Every monastery of Meteora request from visitors to be properly dressed. Men shouldn’t wear shorts and women should wear long skirts. That is why in all monasteries women are given a long skirt to wear before entering. Also, the entrance to every monastery for non-Greek citizens is 3 euros per person. 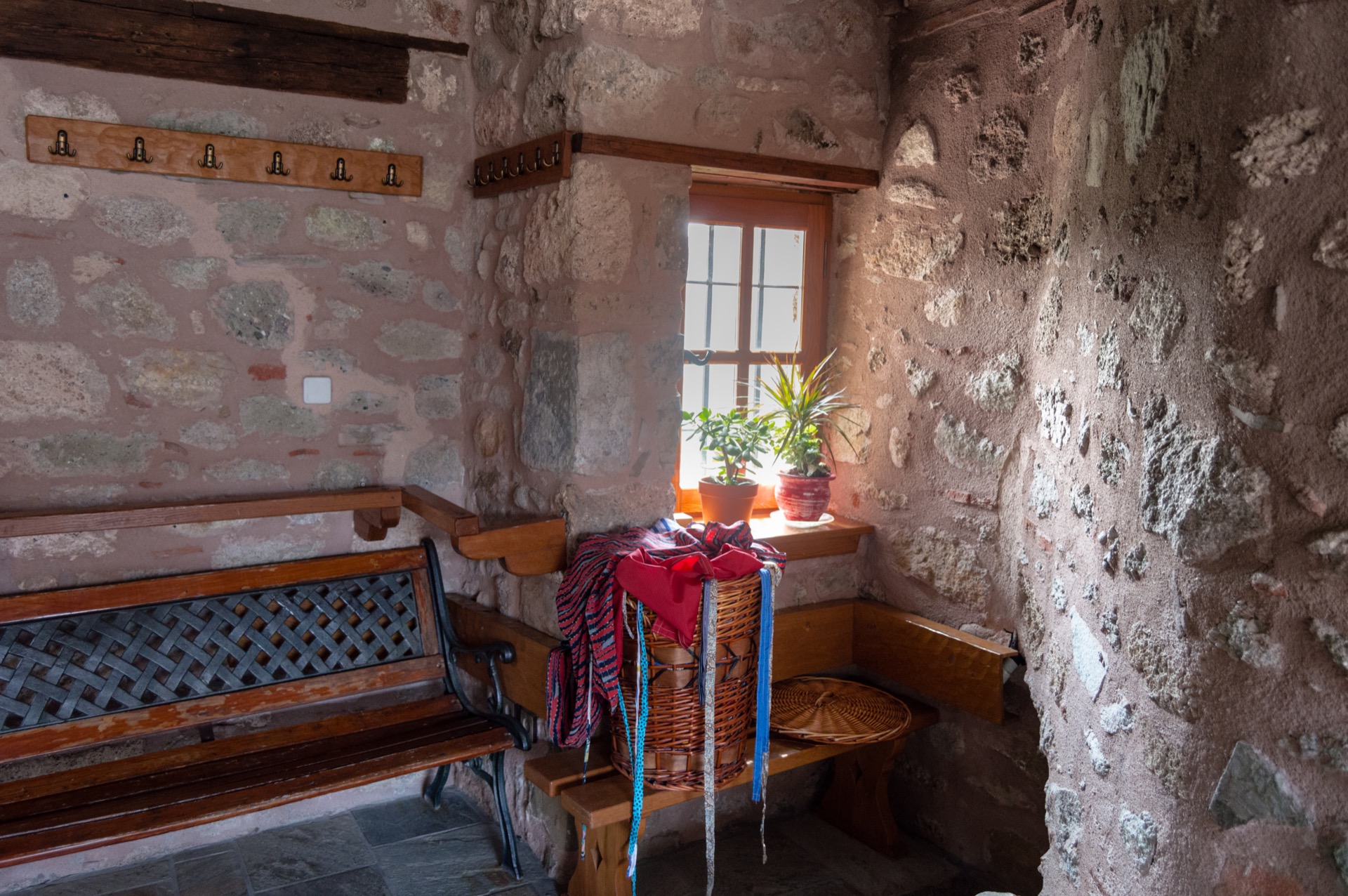 Why would I choose to go with Meteora Thrones?

I explored the monasteries with Meteora Thrones over a period of three days and got the chance to see the area on a Sunset Tour, Hiking tour, and a Half-Day Tour. This was a great experience for two reasons.  Firstly, I wasn’t rushed and I was able to have the time to truly appreciate the beautiful frescoes inside the chapels. I often found myself completely entranced by the deep reds, gold, and black paintings. I have to admit I’ve never seen anything like it before. The other positive thing was that I got to enjoy the views of the early morning fog, violet sunset, and bright afternoon sunshine! Though all incredible, they are vastly different.

Between the two monastery visits, we pulled over to the side of the road at a viewpoint where we could admire the unique topography of the valley. Meteora literally means “suspended in the air,” and I could see why. The cliffs looked like the fingers of the Earth, trying to claw their way into the sky. Formed by earthquakes, smoothed by water and the wind, these cliffs form one of the most distinctive landscapes I’ve ever seen.

The last stop was at the Holy Trinity Monastery

The Monastery of Holy Trinity is among the most impressive ones to look. It’s also very well known from the James Bond movie “For your eyes only.” As a child, I used to admire this monastery from the postcards. I never imagined that I would be making the same pictures as a postcard and that I will be on it.  Indeed, it is challenging climbing on top but once you get there the view will reward you. The monastery was built in the 14th century and again until recently, the only access was through a manual lift made by ropes which you can still see today.

As I mentioned above, I adore this place!

Visiting the monasteries of Meteora feels like stepping back in time by at least a few centuries. The frescoed walls of their chapels portray stories of the pain and suffering of the early Christians. The dramatic landscape of karsts disappearing into the fog manages to retain the solitude that is deemed essential to spiritual awareness. Whether you’re interested in the cultural and spiritual aspect of the monasteries or the sublime beauty of the landscape, Meteora will both surprise and humble you beyond your expectations. Unfortunately, I still haven’t visited the Monastery of Agios Nikolaos Anapafsa. Until next time, it is on my list.

This post is written in collaboration with Daniel Wellington watches. If you want to get your @DW watch, you can use the code SERBIANGIRL and have 15% discount. Let me know what is your favorite watch from Daniel Wellington website  https://www.danielwellington.com/ 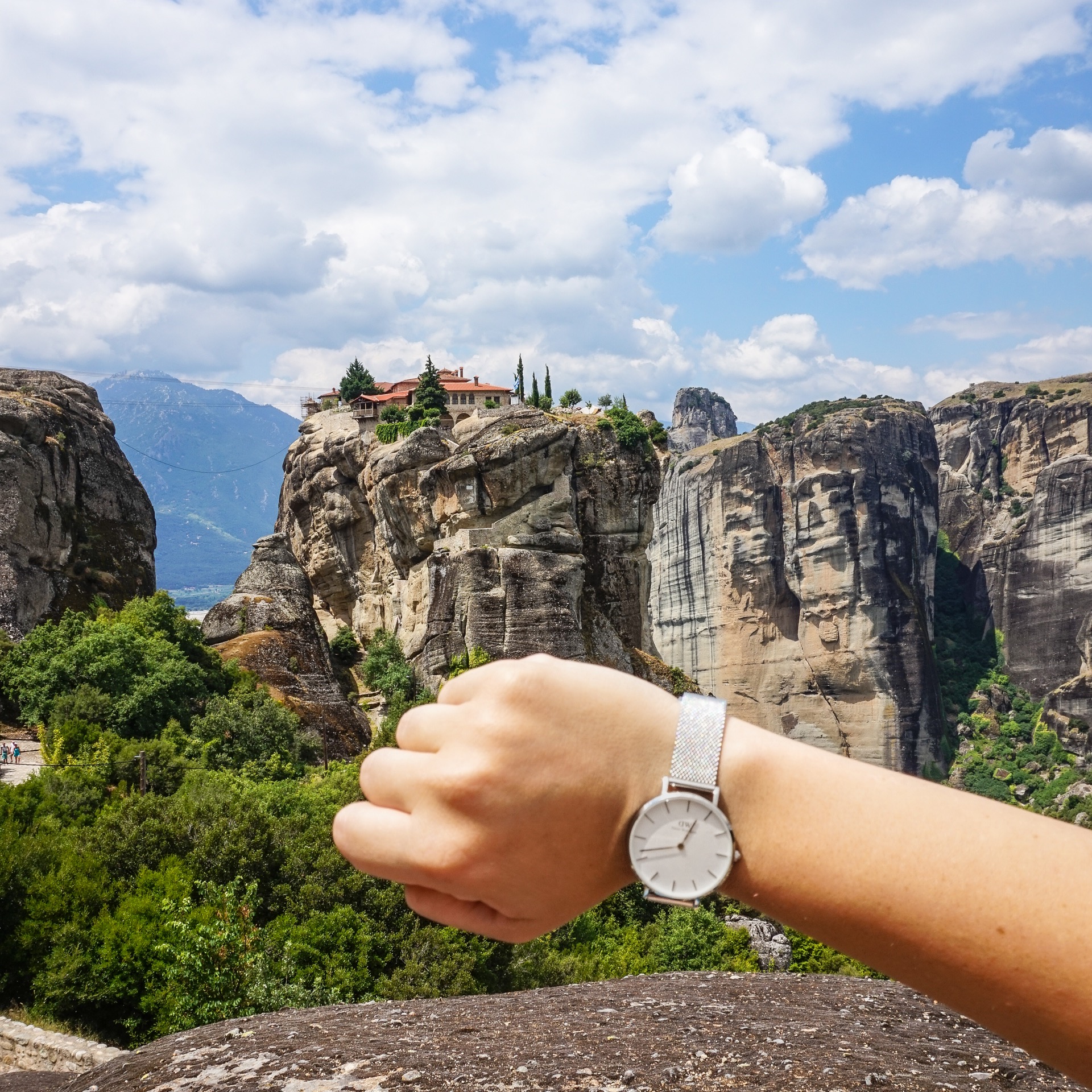