This summer I had a lot of guests. Sometimes I like to say that my house is like a train station, people are passing by all the time. I guess that if you live abroad you know what I am talking about. It doesn’t matter how much time I had people to show them Thessaloniki, every time I am feeling the same. Excitement. It is like meeting your parents with your boyfriend. 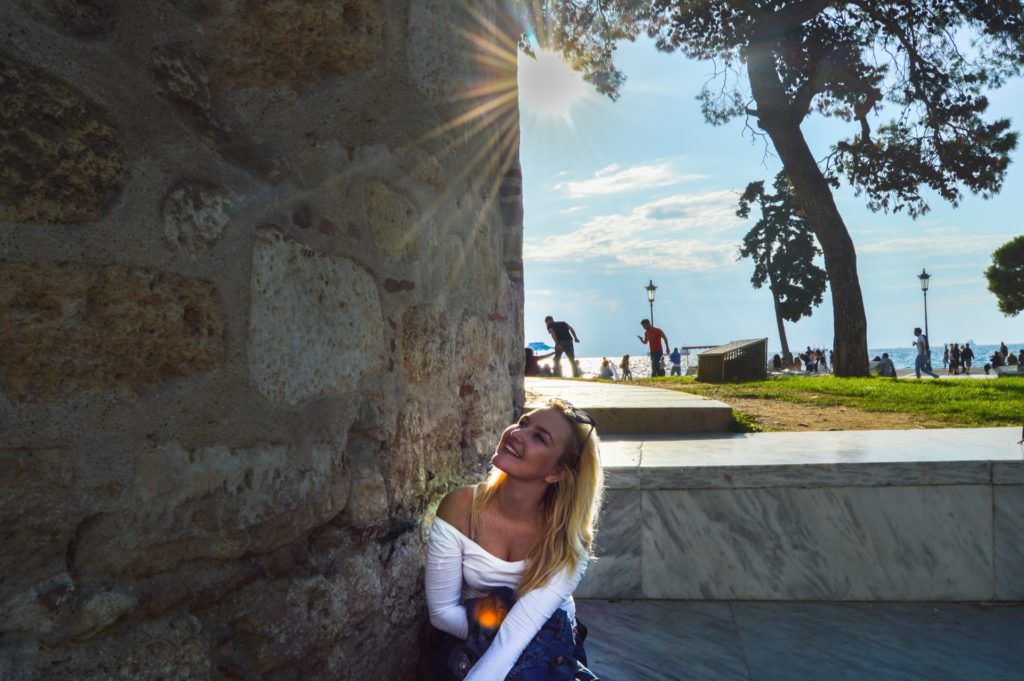 I remember the first time my mother came to Thessaloniki, I made her walk all the day. My plan was to show her everything I love about this city and  I didn’t want her to be disappointed. For that reason, I played a safe game. The White Tower of Thessaloniki is something that everyone knows about. As it has been made into an atmospheric museum, it is an ideal place to get to know the city. The story of Thessaloniki unfolds like a fairy tale over successive levels: the city’s history the stories behind its landmarks, first-hand accounts, and nostalgic reminiscences. Once the visitor enters inside, it will be clear that this place is the heart of Thessaloniki.

On the entrance, you will learn that Thessaloniki had been fortified with walls since the Roman times. Imagine, there was even a wall separating the city from the sea.  It stayed like that until the 19th century when the city started to get the shape and identity which it has today.

Unfortunately, inside the White Tower, every description is written mostly in the Greek language. However, there is the available audio guide. Honestly, I never used it and I found myself many times secretly listening to the audio guides from other visitors. It’s free of charge so my advice to you is to not be lazy and to take it!

Anyway, in case you miss it, you can always find the cutest guy and ask him if you can do the tour with him, or maybe if he can explain to you what he learned. Thanks to the visitor, I learned that the White Tower was built in the fifteenth century after the fall of Thessaloniki to the Ottomans in 1430. At its location, there had been an older tower belonging to Thessaloniki’s Byzantine fortifications, where the eastern wall met the sea wall. 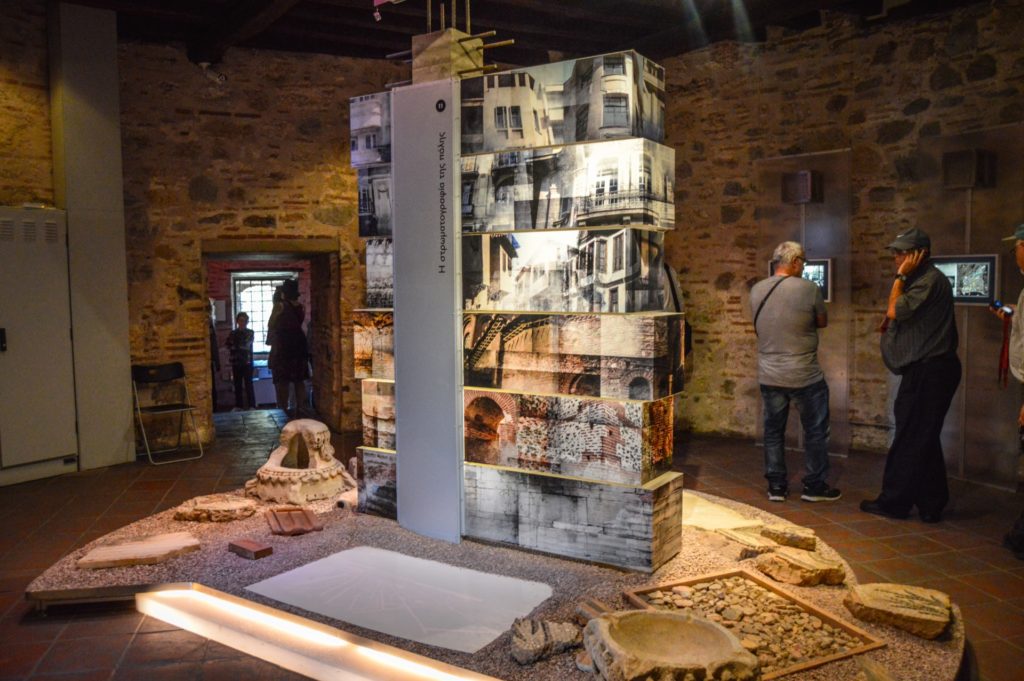 Over the years, it was referred to by various names: the Lion Tower in the sixteenth century, the Tower of Kalamaria in the eighteenth, in the nineteenth century the Tower of Blood when it became a prison and place of execution for convicts. Except for the names, the tower has also changed its purpose many times.  On the ground floor, just next to the entrance, there is a room dedicated to the early beginning of Thessaloniki, and its trip through space and time. The story started when Kassandros founded Thessaloniki in 315 B.C. through the resettlement of the inhabitants of 26 settlements in the surrounding area.

It reminded me of a “dialogue” between past and present. The first-floor topic is about the plan of the city and its infrastructure. I didn’t spend so much time there, as I was excited about reaching the top!

Probably this is the floor where I devoted the most of my time. There are presentations through videos on seven screens, one for each monument that has significant importance for the city. In the surrounding rooms, there are short descriptions of the crucial events that changed the path of Thessaloniki. I was so happy when I found the paragraph about Serbian and Greek collaboration! ( hint for Serbians: it’s in the second room) 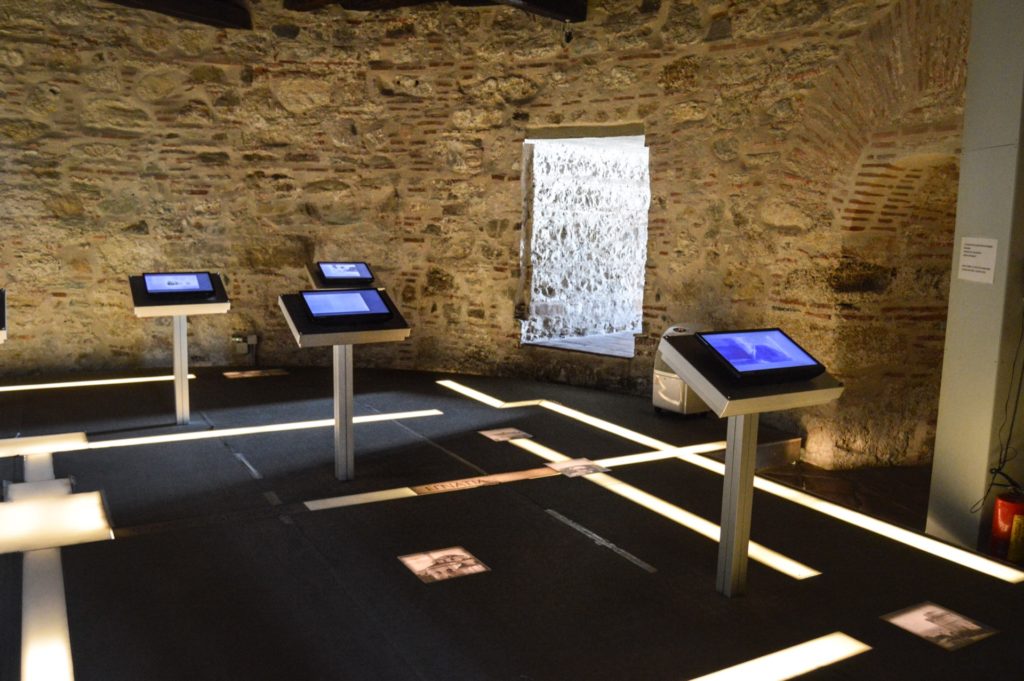 Did you know that the White Tower of Thessaloniki was almost torn down during the period of redesigning the city? Fortunately, because of the high cost of the project, the Greek government couldn’t make that move real.

A HOMELAND OF PEOPLE 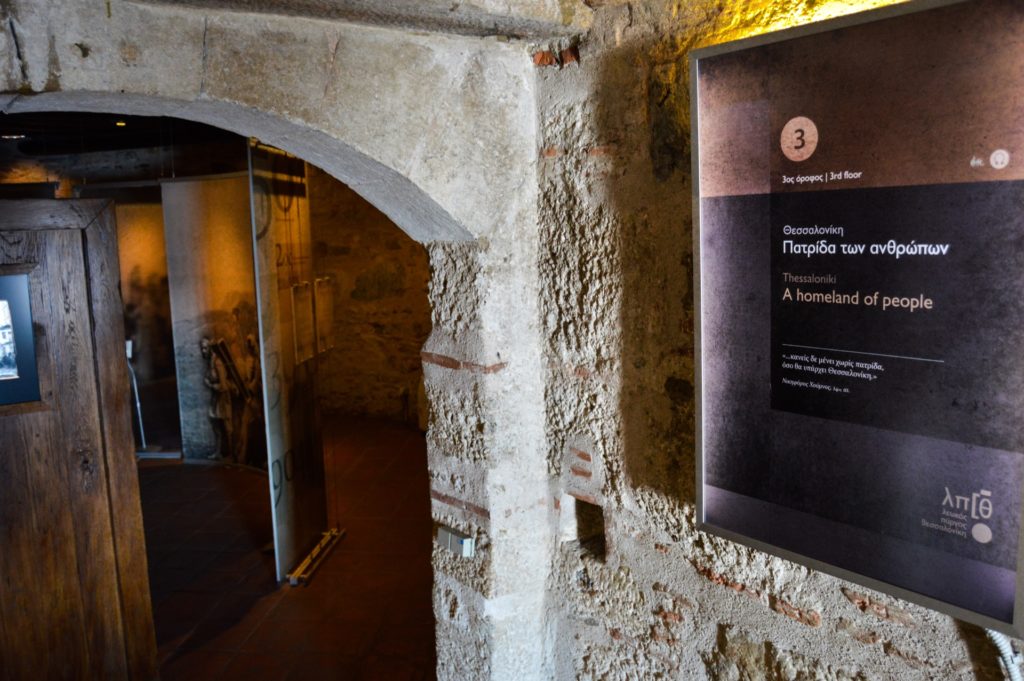 The theme is the city’s people, those who had it as an ancestral homeland as well as those who came there – whether by necessity or not – from elsewhere and found in it a new homeland. I found myself on this floor! The room is designed as someone’s house so in order to enter the story, you need to open the door.  The window has been replaced by a screen on which slides are projected of the lost homelands of the Greek refugees of 1922, referring to their faith and hope that one day they would return to these.

ON THE ROUTES OF COMMERCE

From this floor, I would expect a lot more to see, and maybe a bit more interactive exhibits. At the moment it is about the commerce and economy of the city, the people, and places involved in commerce, products, and production activities.

Do not laugh, but this is the best place to rest from going upstairs all the time! The central area of the room has been formed into a small amphitheater where a film is shown that presents, through the archival and modern material, “spectacle in the city”, images from the artistic and athletic life of Thessaloniki. Every time I visit the tower, this is the place where  I am using the chance to catch the breath and rethink about this trip through history. 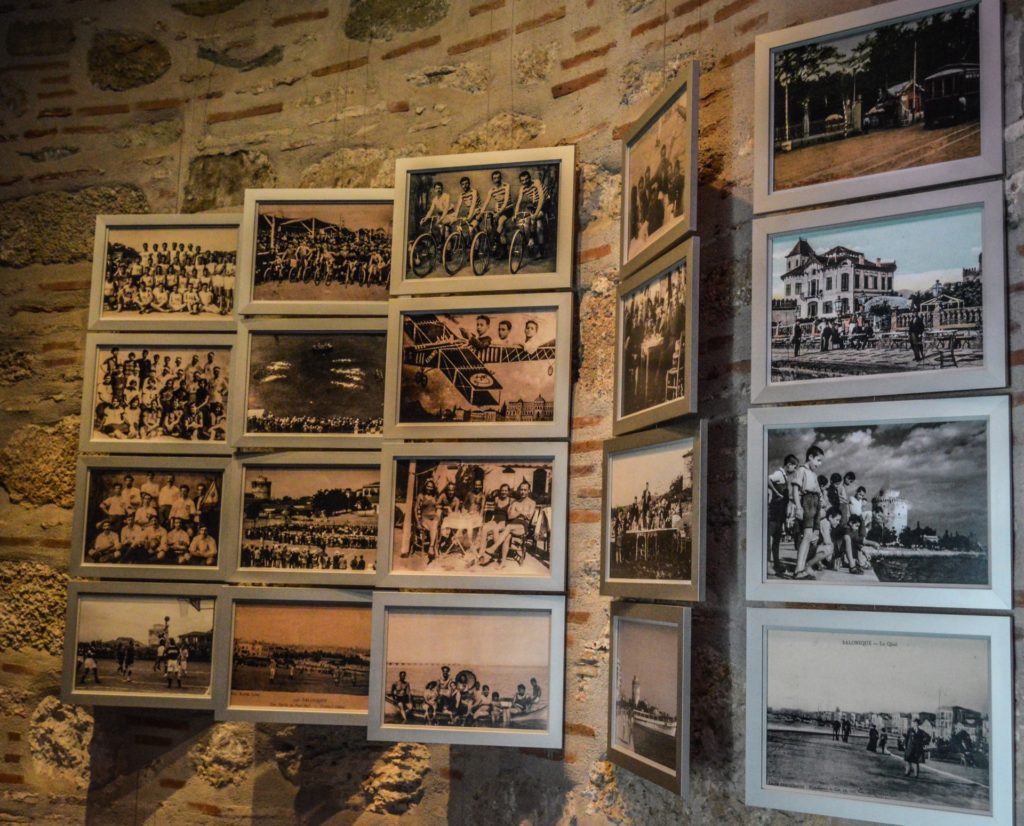 Entrance for all the visitors to the archaeological sites, museums, and monuments owned by the State is free on the following days:
1. Every first Sunday of the month from the 1st of November until the 31st of March.
2. On the National holiday of the 28th of October.
3. On the 18th of April (International Day of Monuments).
4. On the 18th of May (International Day of Museums).
5. During the weekend of European Days of Cultural Heritage (last weekend of September on each year).
6. On the 6th of March (Memory of Melina Mercouri).

For more information about the working hours, the exhibition, or anything connected with this monument please visit the official website. 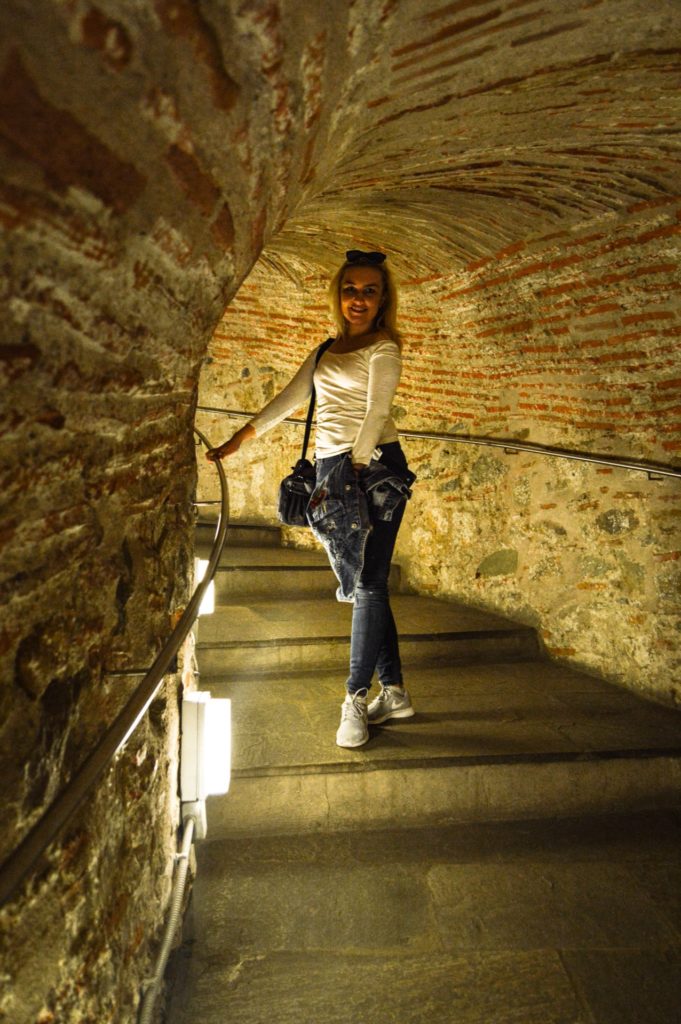 Being at the top, getting more information about Thessaloniki’s famous flavors I became hungry. The first time I saw the dining area with a raised floor and four tables I thought that there is coffee place around! Do not get yourself tricked into it. The tabletops are screens with videos that present the preparation of recipes for food and sweets characteristic of Thessaloniki’s “flavor map”. At the White Tower the food is not allowed, so after I saw my favorite dish  “dolmades”,  I decided to run away and go to the heart of Thessaloniki! 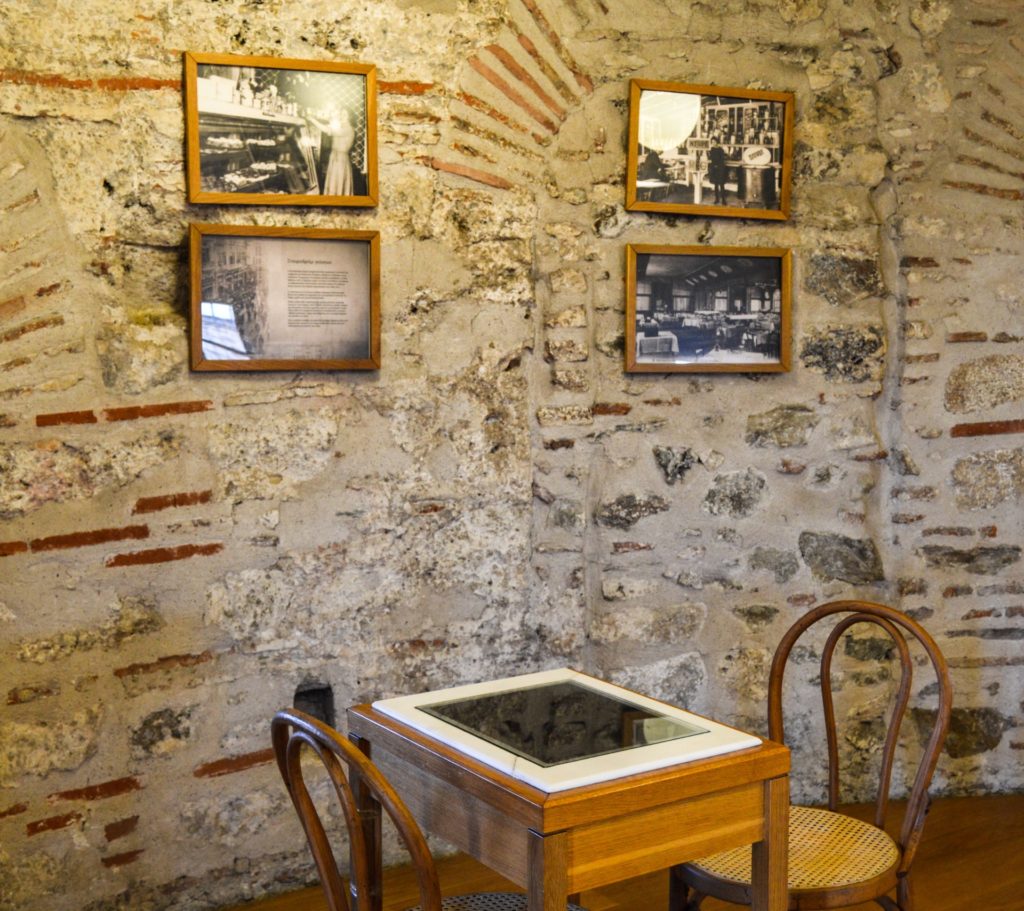 THE HEART OF THESSALONIKI

This is the most famous balcony in Thessaloniki. The view from the above is astonishing! If you are visiting Thessaloniki and do not have so much time to enjoy the exhibition, entering the tower only for the picture from the top is definitely worth of! An ultimate photo opportunity!

Once again, I met here the cute guy from the first floor while he was trying to make selfies without other people being in the picture. Thanks to him, I can share with you my pictures from the top! I am not sure if the photo is good because of his or Thessaloniki’s magic! 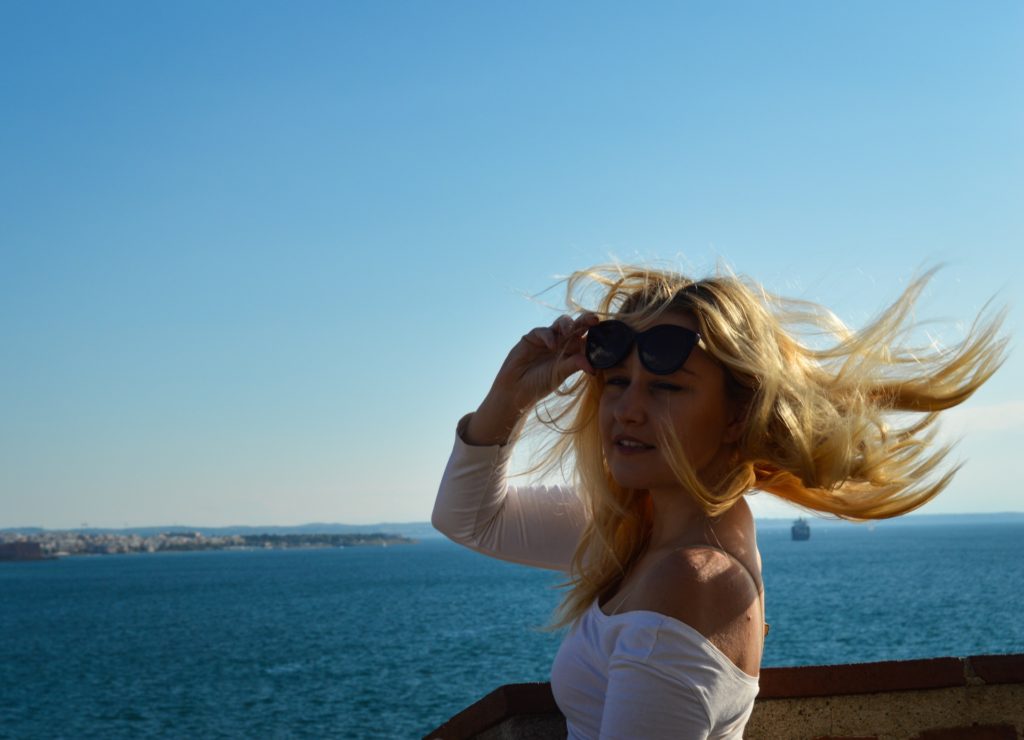 Although it is forbidden to bring drinks and food inside the tower, I would recommend you to bring the bottle of the water (especially during the summer) and to wear the comfortable shoes. It is not a hard way to the top but 92 steps could be discouraging if you have wrong shoes.

Have you been at White Tower in Thessaloniki? What is your favorite floor? 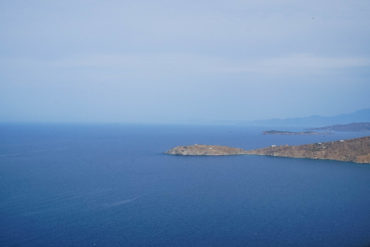 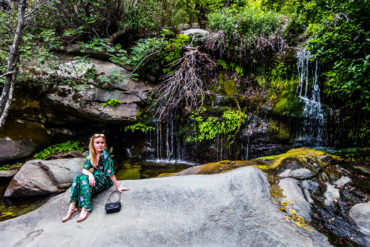 The wild side of the Cyclades island